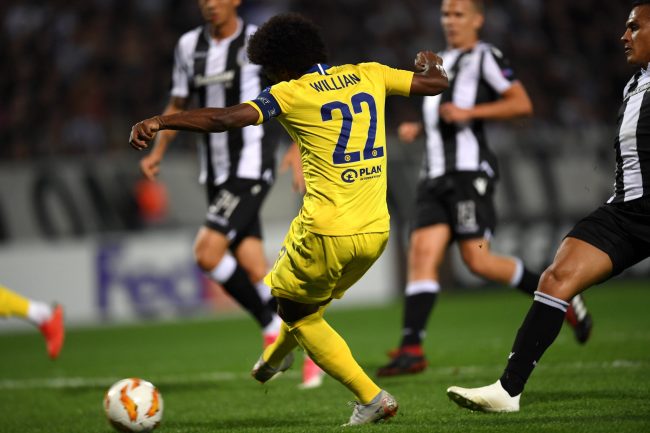 Former Nigeria winger, Victor Moses, was left on the bench for the entire 90 minutes as Chelsea recorded a 1-0 win against their hosts, PAOK FC of Greece in their UEFA Europa League clash on Thursday, reports Completesportsnigeria.com.

Moses has struggled to pin down a regular shirt under under Maurizio Sarri this season, and has made only one appearance for the Blues in all competitions.

Brazilian winger, William scored the winning goal for Chelsea in the 7th minute poking the ball home after he was set up by Ross Barkley.

At the Estadio de la Cerámica, Villarreal, former U-23 Eagles striker, Sadiq Umar was also an used substitute in Scottish side, Glasgow Rangers’ 2-2 draw with Villarreal.

Carlos Bacca and Gerrard Moreno scored both goals for the hosts, while Scott Arfield and Kyle Larfety were on target for Rangers.

Super Eagles midfielder, Uche Agbo came in as a substitute for Belgian outfit, Standard Liege who fell to a 5-1 away defeat to Sevilla at the Estadio Ramón Sánchez Pizjuán, Sevilla.

Agbo came in for Mehdi Carcela 12 minutes from time.