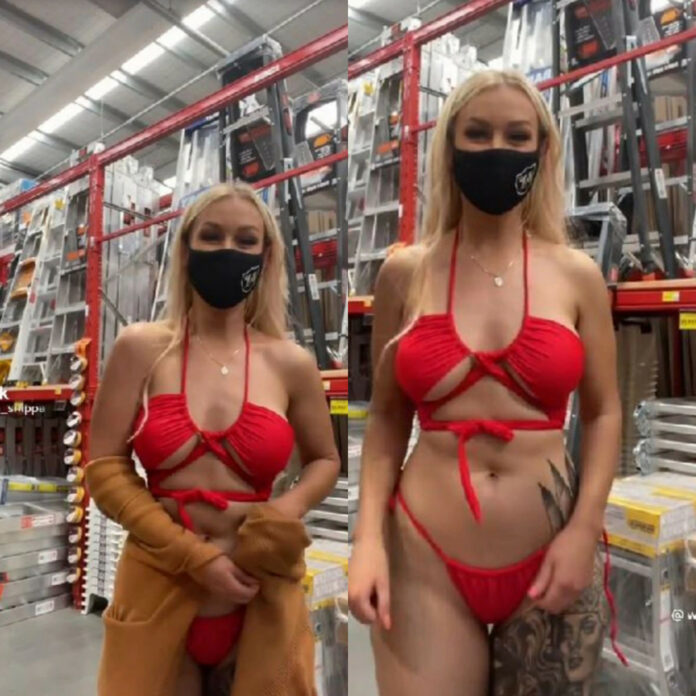 A woman took her participation on a Tik Tok trend to another level as she stripped down to a bikini in a shopping mall.

The lady from Melbourne, Australia was shopping in popular Australian hardware store, Bunnings, and decided to partake in the trend which involves mostly Australian women performing a dance to Men at Work’s hit song ‘Down Under’

After TikTok star @wippa_snippa posted a video of her dancing in a red bikini in the ladder aisle of the local hardware store on Tuesday, the clip racked up more than 480,000 views in less than 24 hours.

She had originally posted video of her dancing to the song while in Bunnings fully clothed.

She wrote in the caption that a “Bunnings worker said she’d do this with me in bikinis if I got 10k likes”.

Then on Tuesday @wippa_snippa posted her own video where she stripped out of her cardigan to her Shein bikini but revealed the “Bunnings worker bailed”.

As she undressed the woman can be seen looking around to be sure she wasn’t caught.

Viewers applauded her bravery in the comments, with one person describing it as the “greatest TikTok ever made”.

♬ Men at work down under Luude Remix – Luude

“I Am An African Giant”- Burna Boy Calls Out Organisers Of...