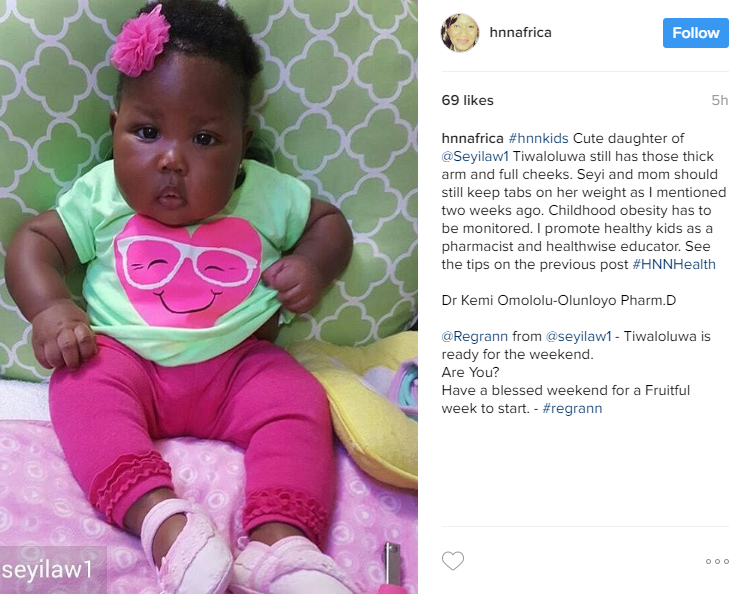 The comedian replied the international journalist after she called his daughter obese in an IG post. Read his response below

Awwww!!! Dr. KEMI OMOLOLU-OLUNLOYO Pharma. D has dished out her medical advice and it is good. Nobody is perfect and sometimes our good advice or idea might come out wrongly, but that doesn’t totally spoil the core of the importance. It is true there is a rise in child obesity, but concluding on a child without prior test and medical findings is professionally wrong.

Some of the main factors that leads to Obesity truly include Overfeeding, lack of activities, hormonal imbalances and genetic factors. The measurement of these factors to determine the weight level of a child is done at a more active age. It is also a natural and well known medical fact that children have a level of fat retention to help combat cold in their surroundings and as they grow and become more active, most of the fat is lost to energy burning.
If a child weighs 8.3lbs with a height of 60cm at almost 5 months, you can tell that such child is not fat, a fact that Aunty Kemi, my friend didn’t check with me. It is also worthy to know that a child that feeds at 4oz (120ml) every 3 or 4 hour without breastfeeding has a healthy eating pattern. The fact that you are a pharmacist doesn’t mean you know better.
The truth is I have cause to disagree with people and people with me, but I know Aunty Kemi, my friend will do better to make her findings before sharing. Thanks guys.

Photos: Help Us Find Our Son