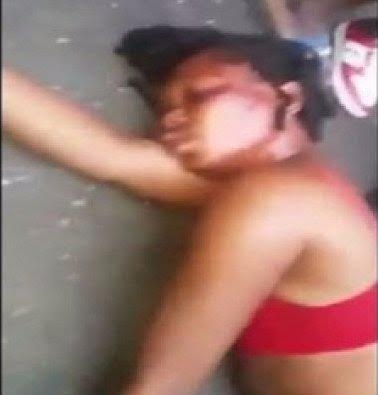 Police in the Ashanti Region capital, Kumasi, have arrested an unspecified number of traders who stripped unclad and beat up an unidentified  Nigerian lady alleged to have stolen items at the Kumasi Central Business District. A screening exercise is expected to take place later Wednesday to identify those who actually participated in the brutal treatment meted out to the unidentified lady. Watch the very disturbing 18+ video HERE.

In the disturbing video that has gone viral on social media since Friday, February 17, a light-skin lady is seen being stripped unclad and sexually assaulted in public by a mob over the alleged theft. The video starts at a point where the young lady had been stripped off her clothes. She covered her waist with a yellow scarf given to her by a good Samaritan, but it was removed by the mob.

Another woman who offered a dress was shoved off and the young lady was not allowed to put it on. The mob made up mostly of men, tore the young lady’s red brassiere and panty. Some disgusting men hit her bum several times while some other disgusting men grabbed her breasts. At a point in the video, the men spread her legs open and kicked her private part many times.

Attempts by the young lady to prevent the mob from hitting her private part was met with even harder beatings. One person who took part in the beating told a reporter that they stripped her unclad and beat her because it is not good for a lady to engage in such an ungodly act.

Luv FM’s Erastus Asare Donkor reports Wednesday morning that the women, mostly traders, who volunteered information that led to the arrest of the some of the attackers have also been picked up to assist with ongoing investigations into the incident. Meanwhile, the whereabouts of the assaulted lady remains unknown.

Shortly after the video went viral, many have condemned the heinous treatment of the woman. Executive Director of the Ark Foundation, Angela Dwamena Aboagye, recently joined gender activists to condemn the mob attack.

“Look at the manner in which they purported to arrest her, they stripped her and look at the acts of violence that were perpetuated against her. When it comes to women, this also sits within not just a social justice framework or criminal law framework, but within violence against women which is completely a human rights issue as well,” she told Joy News.

Also, human rights lawyer Francis Xavier Sosu has urged the Commission on Human Rights and Administrative Justice (CHRAJ) to step up its education of human rights to curb abuses as Social Justice Day was observed globally Thursday. In a release on Tuesday, OccupyGhana also joined calls demanding justice for the lady, asking that the police use the video to arrest the men responsible for the assault.

The Nigerian authorities should investigate and verify the authenticity of this irresponsible occurrence and prevail on the Ghanaian government to ensure the perpetrators do not go unpunished! Despicable!

Check Out The 2 Sets Of Identical Twins Spotted In Anambra