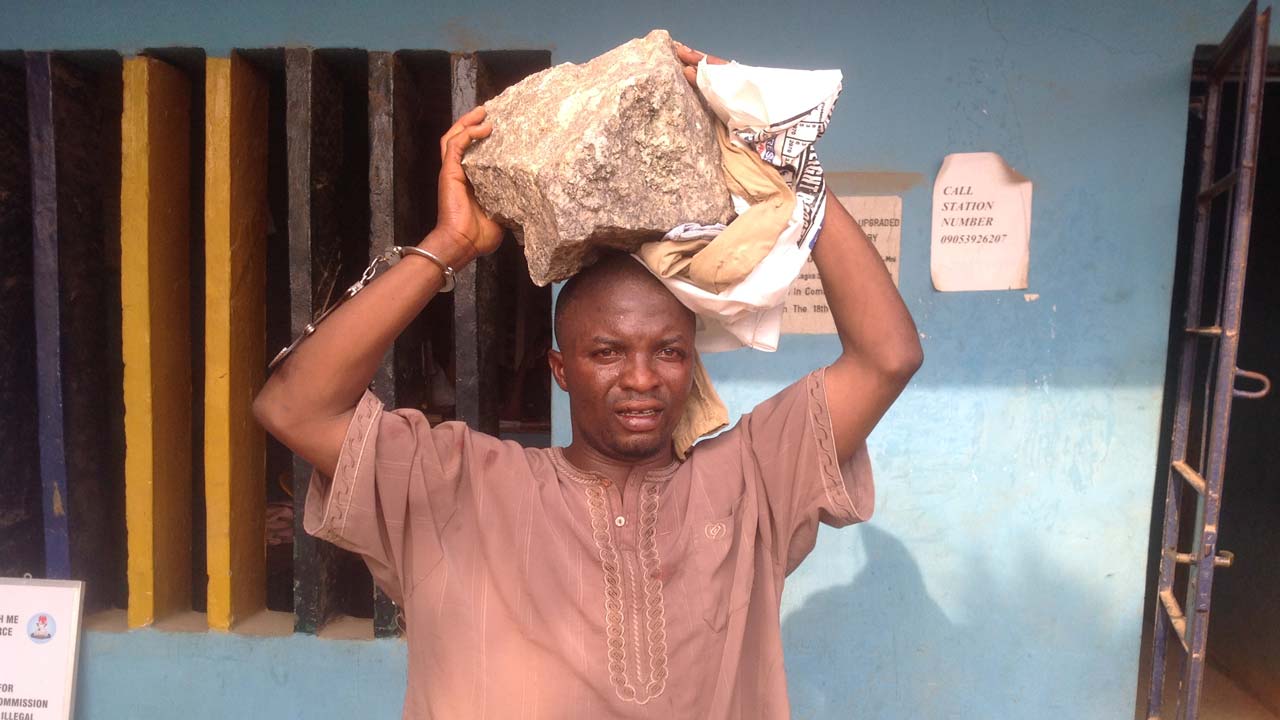 According to the Guardian, the Police in Lagos state have arrested a muslim cleric, Kazeem Alimson also known as Alfa for stoning a three year old boy named, Chiagozie Okereke, to death, whom he allegedly planned to use for rituals. The incident happened at the White Sand area of Isheri-Oshun in Ejigbo area of Lagos State on Tuesday March 14th. The suspect had paid a primary six pupil named Simon Kanu N500 to lure the deceased to his abode where he used a big stone to kill him.

Narrating how her son was lured from her home, Chinasa Okereke, the distraught mother of the deceased said:

“Around 7:00p.m. yesterday (Tuesday), I brought my children out to bathe him. When I finished bathing the younger one, I went inside to get the wrapper to strap him in order to enable me bath the other child. But on getting outside, I didn’t see my baby again. The sister said he went into my neighbour’s house but I didn’t see him there and when I asked, they said he went out with Simon.

I called my son’s name but there was no response. Later, we saw Simon that night, I asked him about the whereabouts of my son, he said he did not see him. Simon took my son, strangled him with his shirt and stoned him to death. He is my third child. I feel hurt. My heart is broken. I need justice.”

The culprits were later arrested by men of the Isheri Osun Divisional Police station following a tip off.
During interrogation, Simon confessed that he was given N500 to lure the deceased to where the Alfa was waiting for him. He disclosed that the Alfa took him and the child to an uncompleted building where the boy was murdered with a heavy stone.

When interrogated, the Muslim cleric denied the allegation of being a ritualist. According to him, he is a cultist.

“I was in my house sleeping when I heard people shouting. When I came out, I saw some policemen and when I asked, I was told that they saw a dead child. I went back inside, and 30 minutes later, the police came back and arrested me. I don’t know the boy and I have never spoken to him.”

While he was speaking, Simon interjected and said:

“You are lying. He was giving me sign with his eyes not to talk. I saw you when you were using the stone to hit him until he died.”

“When the police became involved, I directed that all the persons involved be arrested, including the boy. It was after he was picked up that he confessed. He led us to the Alfa and we arrested him. We searched his house and the environs. We found the boy dead in the uncompleted building. He said they tied his hand and leg with red clothes and while muttering incantations, stoned the deceased three times before he died.”