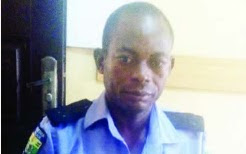 According to Punch Metro, a former policeman, Adeh Ada, has been arrested by the Lagos State Police Command for allegedly parading himself as a cop in the state, eight years after his dismissal. It was learnt that Ada, who was attached to the Mopol 11 in Calabar, Cross River State, was dismissed sometime in February 2009, for losing his firearm.

While awaiting his letter of dismissal, the suspect allegedly manoeuvred his way and got a transfer to the Area C Command of the Lagos State Police Command. He was said to be going for illegal duties and extorting money from motorists, through which he allegedly survived for eight years. A Divisional Police Officer, who observed the unethical conduct of the Benue State indigene, reportedly summoned and queried him.

A police source said Ada opened up that he had not been paid salary since 2009 when he was “transferred” to Lagos from Calabar.

“The DPO, who was alarmed, quickly wrote the state command’s Provost Marshal and he was transferred to the command headquarters for investigation. The police authorities wrote the Cross River State Police Command for information about him.”

“That was when the signal came that he had been dismissed since 2009 when he lost his firearm. Investigations showed that he manoeuvred his way to Lagos and resumed at the command. How he was able to do that still remains a mystery,” he said.

Ada, a former inspector, told PUNCH Metro that he had spent eight years in the police force and had risen to become an inspector when he lost his firearm.He insisted that he was not dismissed. He said:

“I was at a checkpoint sometime in 2009 with four other members of my team. A speeding vehicle suddenly hit me and my rifle got hooked to the bumper of the vehicle. One of my colleagues, Sergeant Gabriel, rode on a motorcycle and chased it.

Afterwards, I also got a vehicle to chase the bus. I met Gabriel standing in front of Zone 6 command headquarters and he said he could not catch up with the bus. He advised me to continue the chase to White Market, Calabar. Unfortunately, I could not find the bus.”

He said he stood for an orderly room trial where he was recommended for dismissal, adding that he appealed the decision and asked that he be surcharged for the loss of the rifle. He said he had yet to be served a letter of dismissal when “I demoted myself and came to Lagos.” He said:

“The panel recommended dismissal for me, and I appealed it. In my appeal, I said I should be surcharged for the rifle, which is in line with the Police Act, Section 400, which says any police officer or rank and file that loses his firearms by negligence or other means can be surcharged.

I demoted myself and came to Lagos in February 2009 with a letter which posted me to Area C. I have been working there since then. I put on my uniform and go to work every day. It was when I asked for my salary through my DPO that they sent a signal that I was dismissed in February 2009.”

Asked how he had been sustaining his family, the suspect, who said he relocated with his four children and wife to the Agege area of Lagos State, said he had been relying on “God and family members.” The police had arraigned Ada before an Ikeja Magistrate’s Court for impersonation and unlawful possession of police uniform.