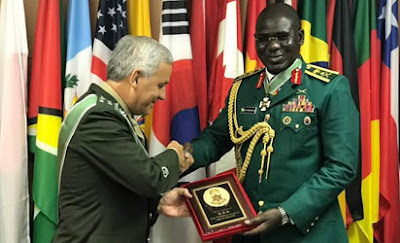 The Chief of Army Staff, Nigerian Army, Lieutenant General TY Buratai, was on Tuesday, 25th April 2017, conferred with the Brazilian Military Order of Merit Award, at Brasilia, Brazil. It is the highest military honour awarded to those military officers that have distinguished themselves in various military endeavours.
Lieutenant General Buratai is one of the few foreign dignitaries to be so honoured with such an award by the country. The prestigious award and its presentation to Lieutenant General TY Buratai, was based on the approval of President Michel Temer, on the recommendation of the Brazilian Army Commander, General Eduardo Villas Boas.

According to citation at the occasion, the award was in recognition of his exemplary and world’s recognized leadership qualities and the Nigerian Army’s effort in the fight against terrorism and insurgency.

I Prefer To Commit Suicide Than Die By Hanging – Nigerian...