Ekiti state governor, Ayo Fayose stormed court in solidarity with the leader of the indigenous of #Biafra #NnamdiKanu as a federal high court in Abuja granted bail to Nnamdi Kanu, Binta Nyako, justice of the court, granted Kanu a N100 million bail on “health grounds”, and asked him to produce three sureties.

She also barred him from granting interviews, threatening to revoke the bail if Kanu did not comply with her orders. See another photo below 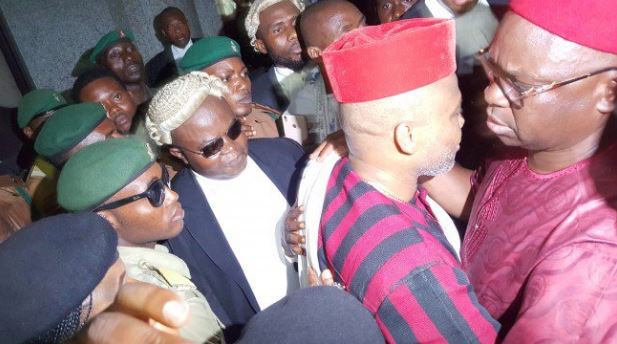 Ayo Fayose, governor of Ekiti state, had earlier joined Kanu at the court.Journalists were barred from witnessing the proceedings by the operatives of the Department of State Services (DSS).Femi Fani-Kayode, a former minister of aviation, was also barred from entering the court room where the case was held.

11-Year-Old Girl Gets Pregnant After Being Raped By Randy Man In...