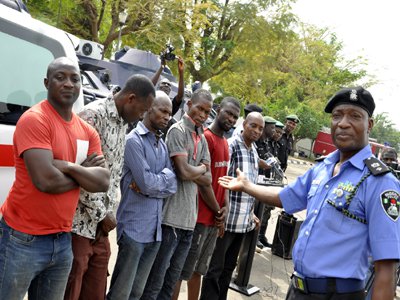 Those paraded are: 54-year-old chairman of Ijumu, Taofiq Isah ; Ade Obage, 29; Abdullahi Isah aka Eko, 32; Ahmed Ajayi, 45; Michael Bamidele26 and ex- Sgt Ede James, the 35-year-old orderly to the chairman at the time of the attack. The police also revealed that other suspects linked to the operation are still at large.
They include  Abdulmumini  aka Iron; Osama  (SNU); Lukman aka General/Commander, China aka Lie down flat and Adamu Aloha .
Briefing reporters in Abuja, the Force Spokesman, CSP Jimoh Moshood highlighted the various roles played in the failed assassination of Melaye. He said:

“Taofiq Isah, according to the investigation so far, is the mastermind of the executed attempted assassination/murder of Senator Dino Melaye. He was alleged to have directed one Abdulmumini aka Iron, now at large (who was said to be his Personal Assistant) and who in turn recruited other members of the vicious and notorious hired assassins’ gang.

Ade Obage voluntarily informed the Police that he has the knowledge and information about the attempted assassination/murder attack of Senator Dino Melaye after the attack was carried out. He further informed the investigators that he was contacted to join the gang by Abdullahi Eko a principal suspect now in Police custody.

Abdullahi aka Eko, a native of Adavi town in Adavi LGA of Kogi State was arrested and he confessed to the crime and admitted to the criminal roles he played along with the other suspects in carrying out the attempted assassination/murder of Senator Dino Melaye.”

On the role played by the dismissed policeman, Moshood said:

“Ex- Sgt Ede James is the police orderly to the principal suspect whose phone was used for communication for the planning of the failed assassination/murder of Senator Dino Melaye.
“He was arrested with a serious criminal link to another principal suspect Abdullahi aka Eko who is an active member of the gang.”

But Isah said the whole attack was stage managed.He admitted having political issue with Melaye but denied involvement in the attack. According to him:

“This is a stage managed show. This interrogation has been on for long and when they brought me here today, I thought they wanted to take my statement again because I have written over seven statements since the commencement of the case.

I have never seen the suspects paraded with me. There is so many political situations going on around in Kogi State and you can see that most of the people involved are Ebira people.

They have problems linked to the political situation in Kogi State. This is just blackmail against the people of Kogi. I was shocked that I was linked to this because I am the Chief Security Officer of Ijumu LGA and the ALGON chairman of Kogi State. I will never involve myself in this kind of shabby deal.”

On the allegation that the ambulance was found in his house, he said:

“I was called when I travelled to Ilorin for APC membership registration and we went to purchase some items for the registration but I was called that my uncle was sick. I told them that they should use the ambulance to take him to the hospital because he was an old and needed to undergo surgery.

Before I returned, they did the operation but my uncle still died. It is a charade show because a statement by someone who went to the Commissioner of Police claimed that Dino brought in thugs to the village and he went and lodged them in a hotel.

It is the responsibility of the police to balance their investigations. He mentioned four names and the hotel they were lodged but they are yet to be arrested. This is a planned work.”

Nnamdi Kanu Filmed While Having Romantic Session With His Wife. Photos