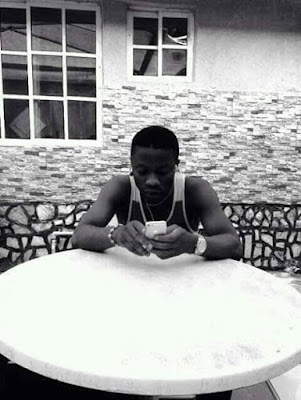 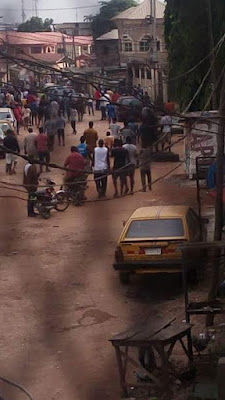 According to Punch, an irate mob at Akowonjo area of a Lagos on Thursday, April 13, went on rampage after a mobile policemen allegedly killed a South African returnee simply identified as Niyi (pictured above). The young man was shot dead at Erico Hotel, forcing angry residents to take to the streets. The protesters resorted to violence, vandalizing the hotel, shops and vehicles. Most outlets in the neighbourhood have been shut down and houses locked.

Heavily armed policemen were deployed to the area to prevent further outbreak of violence. It is not exactly clear what happened, however, media reports said the deceased had issue with a friend over a sum of N5.2m Niyi sent to him in for safekeeping while he was in South Africa.

Niyi returned last week and asked for the money only to find out that his friend Santo has spent it. After failed attempts to get the money, he was said to have reported the case to the police. The policemen reportedly told him to alert them once he sighted Santo in the hotel, where he always stayed.
Around 7am on Thursday, Niyi and his friends reportedly visited the hotel to verify if he was there. A resident of the area, Segun Ajayi, who spoke to PUNCH Metro, said Niyi was into an undisclosed Internet business, through which he realized the money.

“Niyi had not been in the country for a while. He just returned last week. While he was in South Africa, he did a job and told his friend, Santo, to help him pick up some money which was about N5.2m. He told him to keep the money. But before he came back, Santo had started spending.”

“He lodged at Erico Bellisima Hotels. Niyi had been going to check him at the hotel, but the receptionist insisted Santo was not there. He and his friends went there this morning (Thursday) and confirmed Santo was there. Niyi called operatives of the Special Anti-Robbery Squad. They said they were on their way and that he should ensure Santo did not leave the premises.”

“Santo sent a worker to check if Niyi and his friends were still around. They beat the worker. A policeman securing the hotel came in and instead of asking what happened, he started shooting.  He chased the men and shot Niyi in the leg; the man fell. As he was struggling to stand, he shot him in the back at a close range and he died on the spot. The policeman knew Niyi very well; he was probably aware of the N5.2m deal.”

#EndSARS: “Our lifestyle is provoking the youths” – Rochas Okorocha tells...