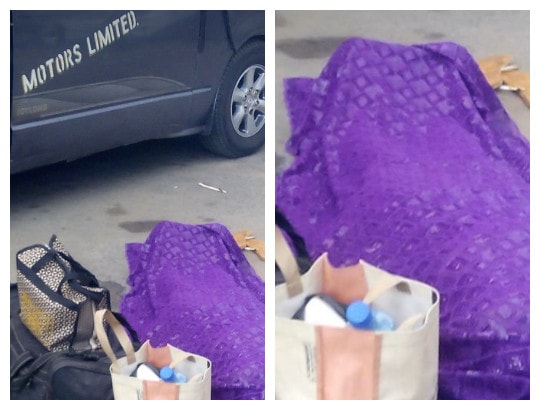 Somehow i wanted to overlook this story, but it boils down to marrying a wrong man hence this post.

Earlier today (thursday 6.pm precisely), I went to Itam Park long distance bus terminus where i was expecting a parcel from Lagos.

On arrival I saw an unusual crowd and I decided to get close. Only to find this woman dead and laid beside the young shall grow bus which transported her to Uyo.

I was privileged to ask a co-passenger who boarded same vehicle with her from Lagos to Uyo.

She said the woman’s husband brought her to the park alive to board the vehicle. And that He knew the woman wasn’t very strong while embarking on the long journey. And had made arrangement with a pastor here in Uyo to pick her and commence prayers.

The woman arrived Uyo alive, stepped out of the vehicle, asked for her luggage to be
given to her which the driver obliged.

Seeing she was weak, they offered her a chair to sit while waiting for pick-up.. the next thing she fell off the chair and that was the end of her life here on earth.

Minutes later, The Pastor came but was told from a distance that the lady he just spoke with on phone is dead. The man took off and disappeared.

Everyone deserted her but the good Samaritan in me came alive and I decided not to leave her there just like others did. I had to put a call across to the Nigerian Police and they responded swiftly. they came to the scene but my joy was complete when a woman came around and identified the lady as Felicia.. she wept and said Edoh Eke Wod meaning (they married her to kill her)… she has been taken to the mortuary by the Nigerian Police.

But my trouble is, Why will a man allow his wife travel such a long distance alone knowing too well she was sick?

Did he ever love that woman?

Did he know the woman won’t survive and decided to send her back to her state for death?

Why didn’t he take her to the hospital for treatment?

Oh Lord! help us… My wife is still weeping.

I’m happy i did my best.

Woman I don’t know you, But may God bless your soul.
Rest In Peace.

Don’t just write R.I.P, the reason i wrote this is for us to learn from it.

Never stay with a man who has no regards for you. if you die he will marry another.

I speak in anger! if staying single will keep you alive, please stay single and live than to marry and die.

Photo of the late woman

Expose me if I have sexually harassed you- Nigerian lecturer challenges...