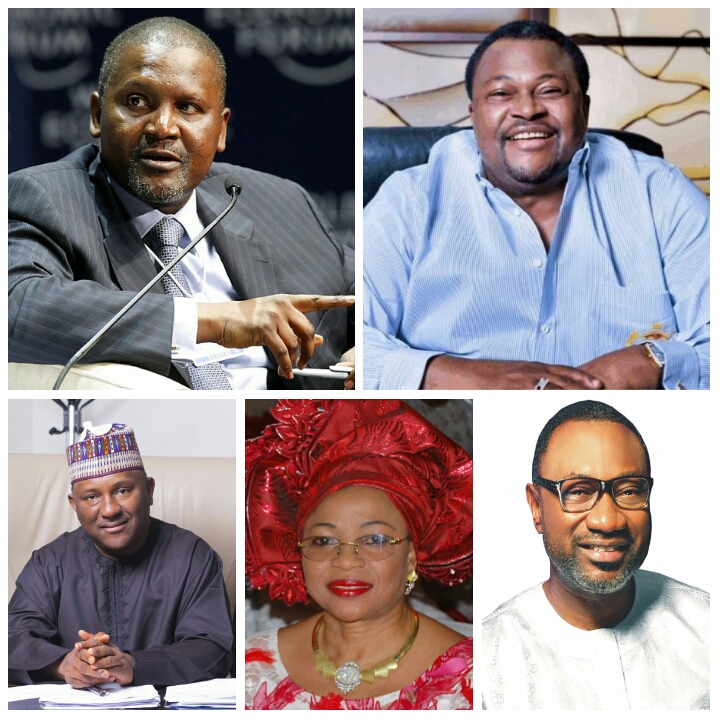 Nigeria is, in some ways, a rich country. The West African nation is a huge oil producer; the continent’s second-largest economy; and, in Lagos, has a bustling port city of over 20 million people with an economy bigger than many African countries.

But with almost 100 million people living on less than $1 per day, extreme poverty remains a major problem in Nigeria. Additionally, the Boko Haram insurgency has left around 5 million people in need of urgent food assistance; the U.N. considers the situation in northeast Nigeria to be at risk of escalating into famine.

But according to a report by Oxfam International published Wednesday, much of these problems could be solved if the country’s richest billionaires clubbed together and shared out their wealth. It would cost $24 billion to eradicate extreme poverty in Nigeria (defined by Oxfam as living on less than $1.90 per day), $5.9 billion less than the total wealth of Nigeria’s five richest people in 2016, according to the report. This extreme inequality, Oxfam has said, must motivate Nigerian leaders to tackle the problem.

But how did Nigeria’s mega-rich quintet make their fortunes?

1. Aliko Dangote: $14.4 billion
Dangote, a cement magnate, is not only Nigeria’s richest person, but the wealthiest man in Africa. The 60-year-old from the northern state of Kano is the chief executive of the Dangote Group, one of Africa’s largest manufacturing conglomerates, with an annual turnover of $3 billion. Dangote is also a football fanatic and has declared his intention to buy English Premier League club Arsenal. He has also actively supported Nigeria’s recovery from the Boko Haram crisis, pledging $10 million in aid in 2016.

Aliko Dangote
Aliko Dangote gestures during an interview with Reuters in his office in Lagos, Nigeria, on June 13, 2012. Dangote, a cement magnate, is the richest person in Africa.

2. Mike Adenuga: $9.9 billion
A telecoms and oil billionaire, Adenuga studied at university in the U.S. and worked as a taxi driver to fund his education. Globacom, his mobile phone network, is the second largest in Nigeria, and the 64-year-old also owns six oil blocks in the Niger Delta, a massive oil-producing region in the south of the country that has recently been hit by militant attacks. He founded the Mike Adenuga Foundation, a philanthropic organization which operates across Africa.

3. Femi Otedola: $1.85 billion
The 54-year-old from Lagos made his fortune distributing Nigeria’s black gold: Otedola’s company, Forte Oil, controls more than 500 gas stations across Nigeria. The son of a former governor of Lagos State, Otedola also has interests in power generation and finance. One of his daughters is a popular DJ who played at the inauguration of Nigerian President Muhammadu Buhari. He supports various charitable causes and donated 300 million naira (now worth $95,000) to the construction of a Christian worship center in 2005.

4. Folorunsho Alakija: $1.55 billion
Nigeria’s first female billionaire, Alakija, 66, has earned her wealth in the fashion and oil industries. Her first company was an elite fashion label which produced clothes for the wives of Nigerian leaders, while the oil company she founded, Famfa oil, has a large stake in one of Nigeria’s most lucrative oil blocks. She also heads a foundation that supports widows and orphans in Nigeria.

5. Abdulsamad Rabiu: $1.1 billion
Rabiu, 56, is the founder of BUA Group; the conglomerate has interests including sugar, rice, edible oil, cement and real estate. His father, Isyaku Rabiu, was arrested in the 1980s under Buhari—then a military ruler in Nigeria—on charges including rice hoarding, and Rabiu took charge of his father’s business during the latter’s detention. His business also has a charitable foundation.

All estimates of wealth are taken from Forbes’ “The Black Billionaires 2016” report, published in March 2016, as per Oxfam’s report. The wealth of the individuals in question may have fluctuated since.

Lady drowns in floodwater five days to her wedding in Kaduna...