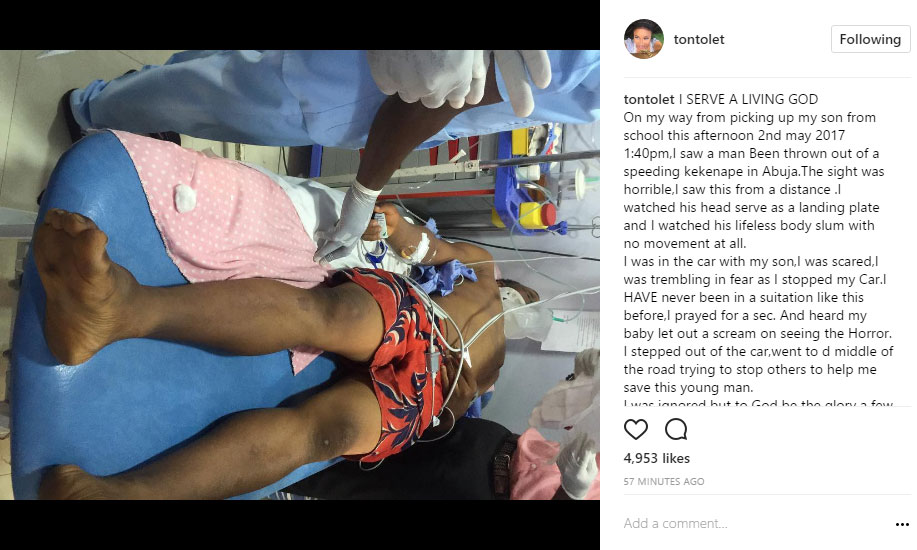 Nollywood Actress, Tonto Dikeh took to Instagram to narrate how she rescued a man who was thrown out of a speeding keke napep.

“I SERVE A LIVING GOD
On my way from picking up my son from school this afternoon 2nd may 2017 1:40pm,I saw a man Been thrown out of a speeding kekenape in Abuja.The sight was horrible,I saw this from a distance .I watched his head serve as a landing plate and I watched his lifeless body slum with no movement at all.

I was in the car with my son,I was scared,I was trembling in fear as I stopped my Car.I HAVE never been in a suitation like this before,I prayed for a sec. And heard my baby let out a scream on seeing the Horror.
I stepped out of the car,went to d middle of the road trying to stop others to help me save this young man.
I was ignored but to God be the glory a few great people stopped,He was not breathing,Not responding.Everyone thought he was dead but I TOLD them that as long as my hands have been laid on this young man in prayers he will be fine..They helped put him In my car with no one opting to follow me,Only a Good Samaritan motor mechanic stepped in to follow me..

WE HAVE SINCE TAKEN HIM TO THE HOSPITAL,HIS BILL is BEEN TAKEN Care of by THE TONTO DIKEH FOUNDATION and we are trying to locate his family and friends..We refer to him as John Doe because we don’t have his Name yet as he is on Oxygen..Doctors say he is stabilized and will be Ok,Glory to God..
I will be posting his face and full Name with his permittion as soon as he can communicate.Pls pray for him..”