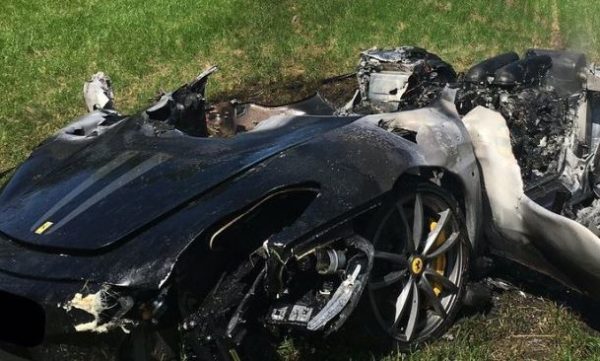 According to South Yorkshire Police, the Ferrari driver left the road in wet conditions and slid 50 metres across a field before the vehicle burst into flames near Barnsley, South Yorks. The driver survived the accident with cuts and bruises.

‘Afternoon folks, were you stuck in traffic this afternoon on the M1 south around junction 37? If so, here’s why.

‘Officers were deployed to a single vehicle collision with reports that the vehicle had left the carriageway and burst in to flames.
‘Road conditions were wet at the time and as officers arrived on scene it became clear there was a vehicle well alight.

‘As we are an inquisitive bunch, we found the driver and were amazed to see he only had minor cuts and bruises!
‘Officers asked the driver what sort of car he ‘had’ to which he replied “it was a Ferrari”.

‘Detecting a sense of damaged pride he then said: “I’ve only just got it, picked it up an hour ago”.

‘The serious part of this post: Over the past couple of weeks there has been a number of collisions where driving styles have not reflected the road & weather conditions – please take more care.

‘Ps. Here’s a couple of pictures of the previously mentioned sporty motor – for those who aren’t very knowledgeable on cars, it was a Ferrari 430 Scuderia.’

See The Moment Charly Boy Collapsed At The #ResumeOrResign Protest