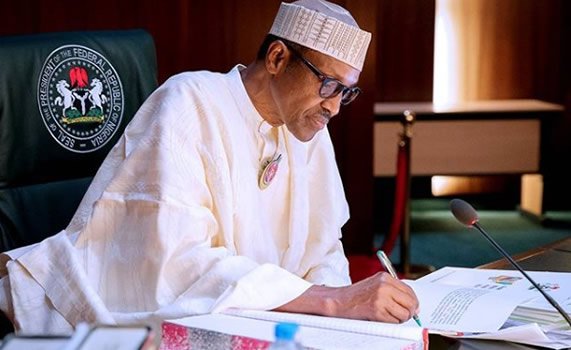 President Muhammadu Buhari said on Thursday that his experience as a military dictator is one of the major reasons he is not “in a hurry to do anything.”
The president said he prefers to seriously reflect on issues placed before him and ensure that his conscience had been satisfied prior to granting approval.
“I decided to drop the uniform and come back here (to be President of Nigeria), so I have gone through it over and over again. This is why I am not in a hurry to do anything. I will sit and reflect, and continue to (operate) with my clear conscience,” Mr. Buhari said during a Thursday afternoon meeting with his party leaders and supporters which was covered by Channels TV in Abuja.
“I had to invite you to let us eat together and I tell you that I am sitting here very much aware of the problem in this country. I will always reflect on historical antecedents,” the president added.
Mr. Buhari regularly draws criticism for his snail-speed approach to national matters, including issues that may be deemed urgent by many, like reacting to tragic incidents or updating citizens about his government’s activities.
Mr. Buhari delayed setting up a cabinet for about six months after he assumed office, an outcome that analysts partly blamed for plunging Nigeria’s economy into recession in August 2016.
The country had since emerged from recession after posting growth for two consecutive quarters in a row.
Lawmakers alarmed by the historic delay immediately moved to curb such occurrences in future by passing an amendment to the Nigerian constitution.

Married Man Sees His Doctor About Stomach Cramps – Finds Out...