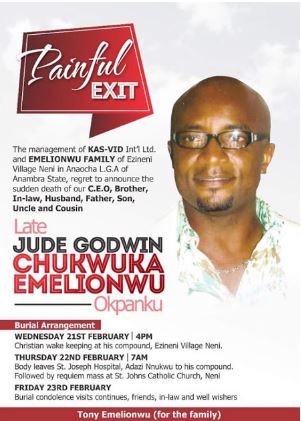 Filmmaker, Chukwuka Emelionwu, will be buried on Thursday, February 22, in his hometown, Neni, Anaocha Local Government Area of Anambra State.

The notable marketer, popularly known as Kasvid died in a fatal accident on January 17 2018, while on his way to his village.A candlelight/tribute night was held in his honour at the weekend. The event which was organised by Nollywood stakeholders headed by Sir Emma Isikaku, was graced by movie stars, producers, marketers and friends of the industry including screen twins, Osita Iheme and Chinedu Ikedieze aka Aki and Pawpaw.

Chukwuka Emelionwu, died after he was involved in a fatal accident. According to his family members, the accident that claimed his life happened after he left a burial at his home town, Neni, in Anambra state.He managed to squeez himself out of the vehicle safely and was crossing over to the other side of the road to make a call when an oncoming speeding vehicle knocked him down. People rushed him to the hospital. He lost lots of blood and died three hours later. The road where he had the accident is said to have experienced a lot of  accidents

Check Out The Gorgeous Dress Omoni Oboli Wore On Her Return...