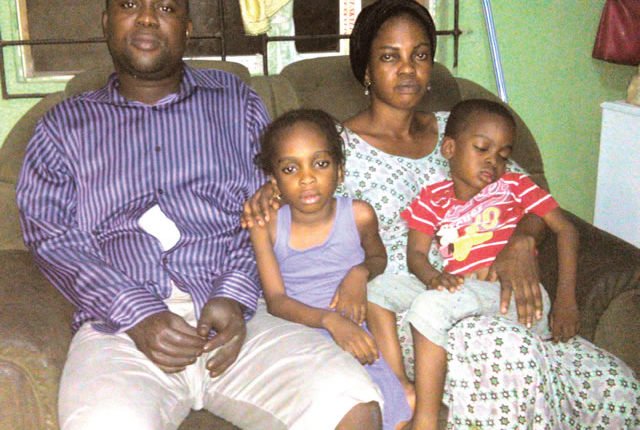 Quadri Tairu is one young man, who knew what he wanted to make out of his life even as a little child. The second of five children, the 37-year-old from Epe,narrates how he almost committed suicide twice because of the challenges of life.

Raised in Oworonsoki, a densely populated suburb in the city, Tairu’s little heart was fascinated by workers of the Power Holding Company of Nigeria climbing up and down electric poles to either rectify or correct faults in their community. The thick gloves, protective suit and other tools those men had on them; everything thrilled him. Unlike his peers, who dreamt of becoming lawyers, doctors and bank workers, toeing the path of the men he had watched several times and grown to admire was his only and biggest desire.

The Epe native would gradually hop on the train plying the route of his dreams years later when after his secondary education, he enlisted as a casual worker at the Oworonsoki branch of PHCN in 2001. As a result of his impressive showing, he was converted to a contract staff the following year after the Federal Government introduced the RCM programme. Things were gradually looking up for him. His target of becoming an electrical engineer was fully in motion. In 2004, after the unbundling of the National Electric Power Authority then known as the PHCN by the Federal Government, Tairu found his way to the Olabisi Onabanjo University, Ogun State, where he had gained admission to study Electrical Engineering. Armed with the practical knowledge he had garnered during his time as a casual and contract employee, he became a star among fellow students, excelling and shining in his academic subjects. Soon, the need to return to PHCN at Magodo to undergo industrial training came during his 300 level and following his impressive performance, he went back there during his 400 level for another round of industrial training. At this time, he had set his sights on completing his studies and finally becoming a certified electrical engineer ahead of the good life the future promised. But just before he could give himself a pat on the back for how far he had come, tragedy struck. Ten years after that fateful incident, the 37-year-old, now a father of two, lives in a world where tears and thoughts of suicide are his only companions.

“We had gone out on duty that particular day to fix some fault inside Magodo Estate when misinformation between a dispatch operator at the district office and a switch operator at the office occurred,” he told our correspondent during an encounter earlier in the week. “While we were carrying on with the task, the man at our office mistakenly switched on electricity supply. I was electrocuted instantly and remained unconscious for about 45 minutes on the pole according to what I was later told, while a colleague named Sunday who tried to rescue me, died on the spot after coming in contact with me. The surge in my body killed him.

“I was eventually pulled down and rushed to the Lagos State University Teaching Hospital where I underwent four different surgeries to be alive,” he said.

But while Tairu has lived to tell his story, the scars of that tragedy has refused to heal. Apart from losing both arms and not being able to do anything anymore without the assistance from others, the Epe native often falls to different sicknesses, threatening the little strength left in him. From the agile, ambitious and adventurous young man that he once used to be, the father of two has been reduced to a crumbling shadow of that image. The smile on his face is in stark contrast to what he feels inside.

“People look at my smile sometimes and think I am happy,” he said. “But if they know the pain I feel inside me, then they’ll understand that the smile carries no significance.

“Psychologically I am not balanced. I have thought of committing suicide twice. The first time that I thought about this was the day my first child asked me why I had never carried her before. The question rattled me, I couldn’t give her an answer, I could only weep and think of how to end my life.

“I cry a lot when I am alone because there are so many things I want to do for myself but which I cannot. I had dreams, but since this tragedy happened, all of them have been shattered.  As it is, I don’t know how far my endurance can go,” he added.

Indeed after 10 frustrating years of being tossed around by different government departments despite a committee’s order for him to be properly taken care of, Tairu’s endurance level appears to be gradually waning. Though flown to India for further treatment on the orders of late President Umaru Musa Yar’Adua in the aftermath of the tragedy, his condition has shown no signs of improvement since that period. He told Saturday PUNCH that rather than carrying out Yar’Adua’s orders of taking him to a specialist hospital in Germany or any European country, those saddled with the task while trying to cut corners, flew him to a cheap medical facility in India, endangering his life in no small measure.

“After the accident happened, a human rights lawyer, late Fred Agbaje, took up the matter and wrote a letter to late President Yar’Adua. When he saw the letter, he immediately ordered that I should be flown to a specialist hospital in Germany or any other European country with great facilities for proper treatment.

“But the people saddled with that responsibility took me to a cheaper hospital in India just to make money out of it. As a matter of fact, I was passed from one hospital to another on the orders of some people in government who were desperate to make as much money as they could from my plight. At a point, I wanted to come back to Nigeria without undergoing the surgery because I was being treated like a slave. I was however, persuaded by some people at the Federal Ministry of Power to undergo the surgery with the promise that I would be flown to a better hospital in Europe once I returned to Nigeria. Till date, that has not happened.

“I stayed in India for seven weeks and was practically left stranded over there. When I came back to Nigeria, I realised that the prosthesis fixed on my arms were not working. I wrote the management of PHCN to notify them of my condition, they told me to be patient and that they were going to do something about my case soon. I took them for their words but till this moment, nothing has been done in that regard. Later, they told me that they had done their bit and that I should take the accident as an act of God. They said if I had any cause to be angry, I should go to court.  They knew I didn’t have the financial power to do so, that’s why was they said so. It is for that reason that I was at the National Assembly last week to seek for help. We were asked to come back on March 13.

“One of the two committees set up to look into my matter recommended that I should be provided with prosthesis that must be maintained. The second was accommodation or provision of employment for my siblings. The third was monetary compensation. The second committee set up also said the same thing and even mandated that I must be provided with accommodation for life. I am not demanding for new things, I am simply asking for the recommendations of the two committees to be implemented. This will make life easier for me. None of those demands has been met 10 years after they were made,” he said.

Bad as it sounds, the situation could have been worse for Tairu had it not been for the moral and material support of his wife and best friend of many years – Azeezat. Though both courting at the time the tragedy occurred in 2008, the 37-year-old woman had to make huge sacrifices, including abandoning her studies at the University of Lagos in her final year just to be by his side and take care of him.

“She was studying Business Administration then. It was a huge sacrifice on her path for which I will eternally be grateful to her.

“But surviving has not been easy as we practically beg to live. On several occasions, I’ve had to sell my children’s shoes for us to eat. My wife sometimes sells her bags too for us to feed. It has not been easy, I must confess,” he said.

Expressing hope that God would turn around their fortunes for good someday, Azeezat, while confirming that life had been very tough for them since her husband’s accident, told Saturday PUNCH that without faith in the Almighty, they never would have come this far as a couple and family.

“It has been a very tough 10 years, I must say. We have faced all sorts of difficulties. But I believe strongly that this suffering will not last forever.

“Though it was tough, I had to drop out in my final year at Unilag to take care of him and give him a chance at life. Till this moment, I deny myself a lot of things just to take care of him and give him hope in life. I believe that once there is life, God can still turn around our situation. We are appealing to the government and Nigerians to assist us, the pressure is just too much for us to bear,” she said.