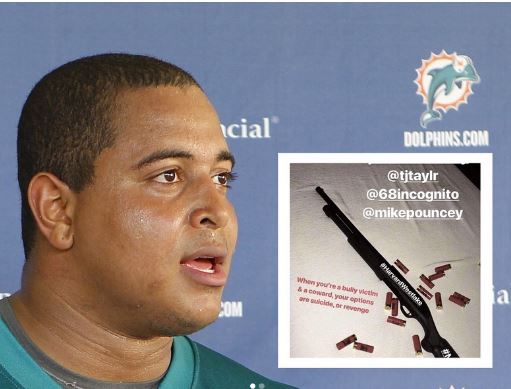 Former NFL player, Jonathan Martin was arrested and has been detained by polive after he made a disturbing post on IG. Many of his fans called the attention of the police to the post after he posted a photo of a gun and bullets, with the names of his former teammates linked in the post. ???????
???????
The post read, “When you’re a bully victim & a coward your options are suicide or revenge.”

Not only did Martin tag three of his former team mates in the post, he also tagged his former high school, Harvard Westlake, (written on the gun) and this forced the school to close down after they were alerted to the post yesterday.???????
???????
Police quickly went to his house where he was found and detained without any resistance from him. An investigation is underway.

According to media reports, here’s what happened to Martin a few years ago;

Back in 2013, Martin had been a victim of bullying by some of his Miami Dolphin teammates that reportedly led to his hospital admittance for emotional distress. Martin’s incident sparked an investigation into a string of alleged incidents, which included threats to slap Martin’s mother, death threats and more, linked to former Dolphin, Richie Incognito.  However, Incognito was not the only teammate to “engage in a pattern of harassment” toward Martin, as the investigation into the matter found that linemen John Jerry and Mike Pouncey were also involved in the physical and emotional abuse and harassment of the former baller. ???????
???????
Now, four years later, it appears the bullying is still affecting Martin, as he listed his former teammates Incognito and Pouncey in the disturbing post.

“Don’t blame the government but your parents” – Kemi Olunloyo