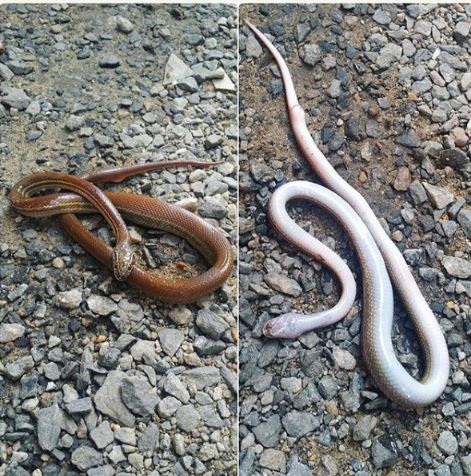 A Nigerian comedian, Segun Dangote has shared a story of how his wife escaped being bitten by a snake in their toilet. Read his Instagram post below.

“At about 12midnight last Sunday, wifey went to pee and seconds later I heard screams from the bathroom “Blood of Jesus! Blood of Jesus!! Segun!! Segun!!! Blood of Jesus!!!” I jumped out of bed asking what happened to which she responded; “There’s a snake in the toilet!!!” As she rushed out of there in shock, I immediately made my way in there to know if it was a snake she actually saw (You know how women can be sometimes na) and if it was, so I could at least ascertain where exactly it was. As I got in, I realised she was right. It was a snake oooo Fada Looooord! Dude’s head was already raised up from inside the WC and first instinct for me was to close the toilet bowl to prevent it from crawling out completely, which I did. Still not sure what to do next (as it was a first time experience for me), I flushed, kept it closed and asked wifey who was apparently still freaking out, to go call our security guard so we could kill it if it was still in there.

When Mohammed came. We opened the seat and it was clear. “What happened?” I quizzed. “E don flush go be dat” he responded. “Really? Just like that?? Okay o” I said. Anyways we left the toilet bowl closed all night and got some salt with Naphthalene balls on our way from work on Monday. This morning (Tuesday) I opened the bowl again to see if I could scrub and clean the place seeing we had poured a number of things inside and… there the snake was again; apparently been hiding underneath the top area of the toilet seat so I quickly closed it, waited for wifey to leave the house (else another drama would have ensued) and then called for Mohammed again. This time we got petrol, poured into the toilet plus where it was hiding and the rest, as they say is history.

Whilst I’m grateful to God for safety, I’m also wondering whether or not I’ve just killed a potential ATM in my house…� Anyways, y’all join me in thanking God and please pray wifey agrees to return to the house with Mo cos she’s not exactly sounding like she’s coming back anytime soon.

Let’s all be more careful and conscious of our environment please. May safety continually remain our portion. AMEN.”