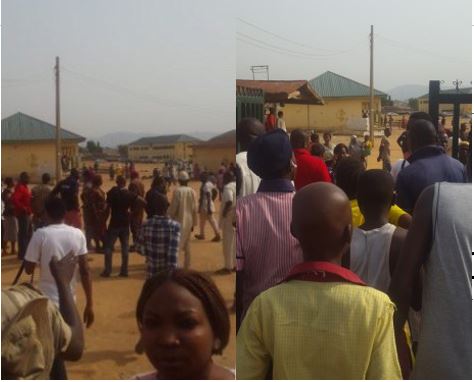 According to DailyTrust, the late students identified as Na’imat Yahaya, 14, and Yahaya Garba, 14, both in primary four, died after returning to their homes.

The third late student identified as Moses Sunday of primary one, was said to have been taken to the Kubwa hospital along with two other school pupils namely Aisha Isa and Hasiya Haruna on the day of the party.

He died on Wednesday while the two others are said to be in stable condition. The development has led to confusion in the area, with parents storming the school to pick their children.

The children were reported to have shared biscuits among themselves as one of the them celebrated his birthday. According to sources within the school, the child that shared the biscuits among his friends has not been identified as the school didn’t get hold of the situation as the pupils didn’t show any sign of distress during school hour.

According to one of the parents that stormed the school to pick up her ward:

“I didn’t hear about the information on time until a friend called me this afternoon that children are dieing here in this school. I had to abandon what I was doing to rush down her and pick up my children. This is quite sad and i think it i time for school managements to top pupil from celebrating their birthdays in school”

The residents around the school and families of the victims however stormed the school vicinity to wreck havoc. This was quelled by the operatives of the Special Anti Robbery Squad (SARS) and policemen deployed to the scene.