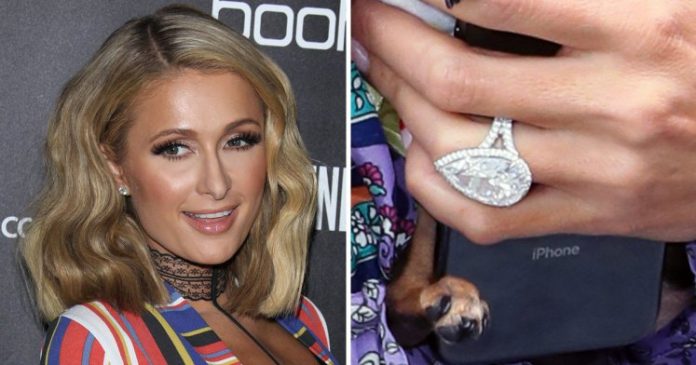 Paris Hilton was out having a boogie in Miami, when she suddenly discovered she lost her $2 million (£1.5 million) engagement ring. According to Page Six, in the early hours of Friday morning, the 37-year-old had her fiance Chris Zylka and the club security searching the VIP section high and low for her missing jewelry. Luckily for the TV personality, her ring was found in someone else’s ice bucket at the former soda factory RC Cola Plant. We have no idea how it got there, the only explanation is if it flew off the star’s finger and glided across the room while she was tearing up the dance floor.

According to the publication, Hilton ‘waited nervously in floods of tears’ while he beau was ‘astonishingly calm’ while searching the venue. The pair got engaged just after the new year and Hilton announced their happy news in an Instagram post in January 2018. In the caption, she wrote: ‘I said yes’ followed by an array of photos featuring Zylka down on one knee. She added: ‘I feel like the luckiest girl in the world!’