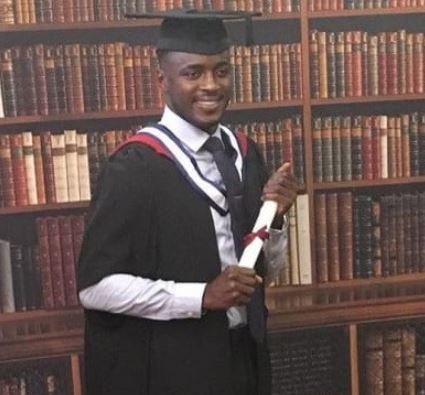 The family of a man murdered in Hackney yesterday paid tribute to their son and brother, saying they are “beyond heartbroken”, and urging the public to help find his killer.

Read the tribute by his family below:

“We are beyond heartbroken, filled with emptiness as we put together our feelings on our greatest loss. A bright light, Abraham Oluwatosin Dolapo Badru, was put out by the hands of evil person on Sunday night. His mother’s only child, the pillar of her existence, and the first of his father’s two children. He was the best son any parent could ever pray to have and a very loving and protective brother; he was humble, conscientious, respectful, kind and exuberated love and confidence.

“Abraham was goal-driven, a very ambitious, hard-working young man who also dedicated his time, skills and talent to different charities for different causes. He was studious and worked extremely hard to earn a BSc in Sport Science and a MSc Professional Practice in Sports Coaching at University of Gloucestershire, he was aspiring to also have a PhD under his belt. He was an upstanding individual who advocated unity and peace in his community and to those that surrounded him.

“Abraham was truly one of a kind, he was his mother’s world, equally he cherished her and cared for her in every way he could. They were best friends, he was an absolute joy who never stopped smiling, a smile that would melt hearts, always willing to help everyone he came across. He was always striving to improve his life and the lives of those he cared for. He was a highly dependable son and friend, and honesty was second nature.

“Abraham was a very brave young man, he was the second to receive a Binney Memorial Award for his bravery and a Police Public Bravery Award, both issued by the police at a ceremony in Manchester on 8 July 2009. He helped the police in convicting some boys who had raped a teenage girl on their estate by being a witness in court. Not withstanding all the threats he received, he was bold and strong enough to do the right thing and make sure justice was served. He did his best and what was right in all circumstances.

“Abraham had a zest for life, he was passionate about football and fashion, he enjoyed travelling, exploring and experiencing different cultures. He was generous to a fault, a very sociable individual.

“Abraham hates confrontation, he has never been involved in any fight be it physical or verbal, not to talk of being involved in a gang or condoning gang violence. An avid church-goer, a God fearing young man, this is why it’s hard to comprehend why anyone would want to hurt him and cause a void that could never be replaced or recreated, why would anyone lurk and wait to carry out such a brutal attack? He steered clear from trouble, loved life too much to risk it in any way. He just wanted to be happy and continue to make his parents happy and his loved ones.

“There is absolutely no reason for any kind of violence, it causes more pain than resolution, the gun culture is becoming rampant in our community and we all need to come together and put a stop to it. How many more families will be ripped apart with this senseless and callous crime. We would like anyone who has any information that could possibly help to reprimand and possibly convict the perpetrator to please come forward, please search your conscience and imagine being in our shoes. We all feel empty and helpless, it would bring some sort of resolution if we can have Justice for Abraham Badru as he wouldn’t hesitate to help anyone in need when he knows he can help.

“We really have to stop and think – when will we stop the innocents from being taken off our streets, why do we allow other people to play God? It’s all fine until it happens close to home and if we don’t put an end to it now, that will be the eventual reality, a lot of innocent souls taken suddenly and occasionally. We urge someone, anyone to come forward with information be it minute. We’ve all come together to talk about how much joy Abraham brought to our lives and the least we can do is ensure his life and death won’t be in vain.

“You were such a beautiful soul AB. All you ever wanted was just to live that beautiful life just like every normal person which you did. You will always be loved. Forever in our heads AB.”

Police were called at 23:11hrs on 25 March to Ferncliff Road, E8, following reports of gunshots heard.

Abraham was discovered in the street suffering from gunshot wounds. Despite the best efforts of paramedics, he was pronounced dead at the scene.

A post-mortem examination took place at Poplar on Wednesday 28 March and gave the cause of death as 1a Shotgun wound to the chest.

There have been no arrests at this stage.
Detectives from the Met’s Homicide and Major Crime Command (HMCC) are investigating.

So far they know that just before the incident Abraham had parked his black CLA AMG Mercedes in Ferncliff Road opposite the green and just after the alleyways that lead to Langford Close and Foxley Close, facing Downs Park Road.

As he opened the boot, he was approached by a suspect or number of suspects who shot him without warning. Officers are talking to witnesses and examining the scene to build up a picture of the suspect or suspects, what they looked like and in which direction they made off.

Detective Chief Inspector Noel McHugh said: “This is a tragic and shocking incident – a young man with ambitions and so much to live for gunned down in the street. His family and friends cannot comprehend what has happened.

“We need to build up a picture of Abraham’s life , who all his friends were, girlfriends and any disputes that he may have had. We want to focus on his movements from Saturday up to the point of his death – were you with Abraham, did you speak to him?

“I am particularly keen to hear from anyone who was in Ferncliff Road and the surrounding roads between around 22:30hrs and 22:15hrs. Did you see anyone loitering, any vehicles or people that looked out of place? Abraham had a nice car, it would probably have caught your eye parked in a street – did you see it that night?

“If you were in these roads at the time of the shooting, it is really important that we hear from you to account for your movements and to exclude you from the investigation.

“Abraham was a striking young man and a real contributor to society. He was awarded a National Police Bravery Award in 2009 after intervening in a rape and then giving evidence in court. Such courage and an overwhelming ssense of what was right and wrong clearly demonstrated his strength of character.

“The answer to Abraham’s death lies in our community and people will be talking about what happened; I need you to make that call today to my incident room with any information you have, no matter how small. You can also call Crimestoppers anonymously.”

Uncle allegedly kills his niece after a mild argument (Photos)