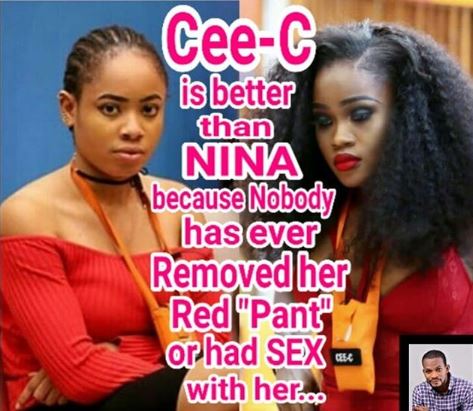 The controversial actor says Cee-c is better than Nina because she has never removed her pant for anyone in the house. See what he wrote:

@ceec_official is better than Nina because nobody has ever removed her “red pant” or had SEX with her miraculously in BBnaija…?? We can pour out all the different specie of locally made insult on @ceec_official for verbally assaulting Tobi, as the Biggest Actor in Nigeria, i think she deserves it, but she is not as useless, reckless and irresponsible in the #BBnaijahouse as NINA. Has anyone ever seen the legs of @ceec_official being hung on the wall like an Antelope while having SEX in BBnaija??? No, has anyone ever seen her RED “pant” being torn live on national Tv before SEX?? No, So my people, wouldn’t you agree with me that @ceec_official is still a saint where this mumu girl called Nina is, someone that can not even control her Sex drive, but would stupidly spread her legs to have marathon Sex on national #television, so disgusting. @ceec_official might need counseling, but Nina is an irreplaceable disgrace to our Culture and Tradition in Nigeria.