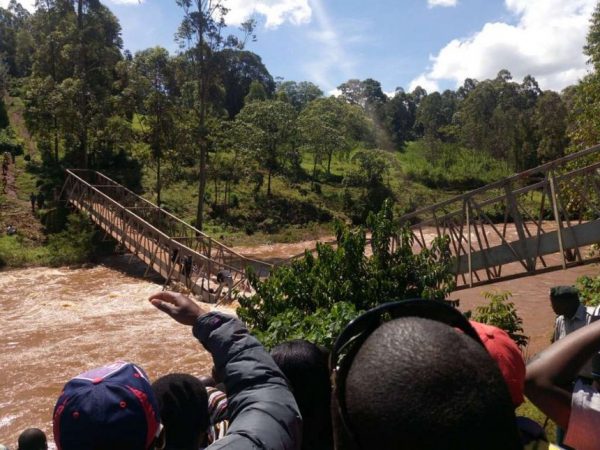 Government officials, journalists and elated residents of Ogembo, were shocked as the Governor of Machakos County, Alfred Mutua; and others plunged into the river while taking a tour of a newly constructed footbridge.

Ogembo residents had waited to have the newly constructed Ogembo Nyakorokoro footbridge inaugurated.

And on Friday (today), the wait was over, as Governor Mutua, aided by the Deputy Governor of Kisii, was on hand to declare the footbridge open.

It turned out that the contractor did a shoddy job, as the footbridge gave way under the weight of dignitaries and villagers who had trooped out to celebrate the august event.

Worse affected was Governor Alfred Mutua, who escaped what would have been death-by-drowning as the bridge collapsed while he was taking a selfie.

Mutua, Kisii Deputy Governor Joash Maangi and their entourage, which included journalists, had been standing on the recently constructed Ogembo Nyakorokoro footbridge in Ogembo area of the county when the bridge caved in, reports The Star.

The governor, the deputy governor, as well as two journalists, fell into the water, before they were rescued.

Mutua and Maangi were pulled out and rushed to Ogembo Hospital in Kisii County in an ambulance.

However, the governor dismissed the report about selfies.“I have been baptised by River Gucha and now I must build a house in Gucha,” he said, as reported by Radio Citizen.

“The bridge caved in after a crowd of those who accompanied us joined us,” he said.