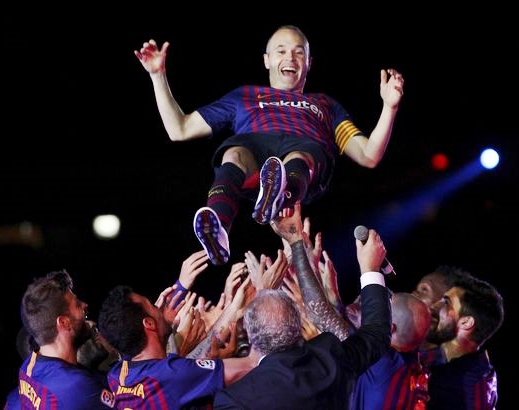 0
SHARES
ShareTweet
Departing Barcelona midfielder, Andre Iniesta has named the three players he sees as his successors at the Nou Camp. Iniesta played his 674th and final game for the club in Sunday night’s 1-0 win over Real Sociedad at the Nou Camp.
“This is a difficult day but I have spent 22 marvellous years here. It’s been a pride and a pleasure to defend and represent this badge, which for me is the best in the world.
“Thanks to all my team-mates, each and every one. I will miss you all so much. And thank you to the fans, for all your love, everything you’ve made me feel since I arrived here as a boy. I leave as a man. I will keep you in my heart forever,” he said after the match.
Iniesta added that he sees January signing, Philippe Coutinho, Denis Suarez and youngster, Carles Alena as his successors at the club.
He said: “In the team are left players like Coutinho, Denis Suárez or Alena who have a lot of quality”.
Coutinho has scored 10 goals in 22 appearances since joining from Liverpool in January, while Suarez has been in and out of the Barca side since rejoining the club from Villarreal in 2016.
20-year-old Alena signed his first professional deal with Barca last year and scored on his debut in the Copa Del Rey against Hercules last season.
0
SHARES
ShareTweet