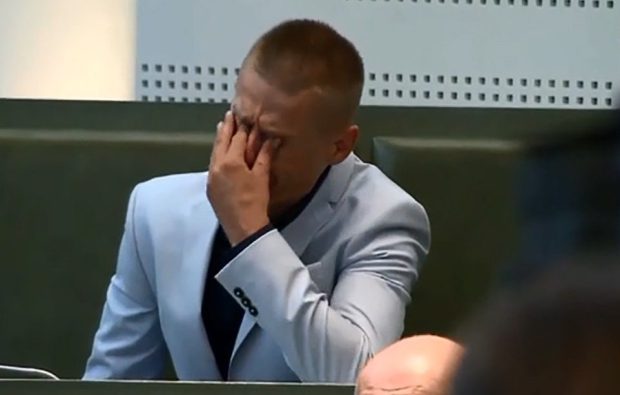 This is the heart-wrenching moment a man who has spent 18 years behind bars for a rape and murder he did not commit is acquitted of his crimes. Tomasz Komenda cried tears of relief and buried his face in his hands as a panel of judges declared him innocent.

A review of previous evidence using new forensic tests proved he could not have committed the crimes for which he was accused on New Years Eve in Poland in 1997. Mr Komenda, now 42,  was released from prison in March after prosecutors reviewed his case when the parents of the 15-year-old victim expressed doubts about his guilt. Upon his release, he said: ‘For the last 18 years I have been asking myself: What have I done wrong to have my life turned into hell? ‘All that time, I was treated like filth.’

The teenage victim in the case was raped and murdered during a 1997 New Year party in south-western Poland. Court documents showed she died from blood loss and freezing temperatures. When police found her body, they initially predicted there were multiple suspects who left behind a large amount of evidence, including a woolly hat containing hairs and bite marks on the girl’s body. In explaining the verdict, the court said advanced forensic techniques had shed new light on the evidence collected at the time and excluded Mr Komenda as the killer.

It also pointed to mistakes in the process of gathering evidence and to a negligent approach to testimony from the defence witnesses. Mr Komenda was jailed seven years after the crime, despite 12 people confirming his alibi that he was over two miles away from the scene at the time. When he was arrested he complied fully with police, but says he was beaten and threatened and said: ‘They beat me so much that I would have even admitted to shooting the Pope.’

Justice minister Zbigniew Ziobro said the acquittal shows that the mistakes of the justice system can be corrected. ‘No one can give back the years that Tomasz Komenda has lost. Still, the acquittal restores the sense of dignity of an innocent man who had been wrongly convicted,’ he said.