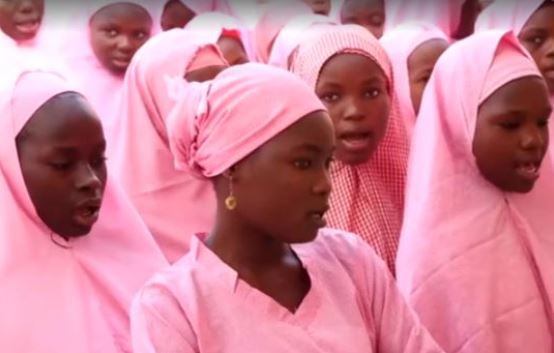 0
SHARES
ShareTweet
Voice of America has revealed that some of the girls abducted by Boko Haram in a school in Dapchi three months ago have returned to school despite threats from their abductors to never return to western education.
When Boko Haram terrorists raided Government Girls Science and Technical College on February 19, 2018, 111 students, alongside two other non-students, were abducted. A month later, 105 of them, alongside the two others, were released by their captors while five were reported dead and one, Leah Sharibu, still held by Boko Haram.
With the resumption of a new school term, the Voice of America reported that some of the released girls have defied Boko Haram’s threat and returned to school.
One of the girls, Maryam, told VOA that the terrorists photographed their faces and warned them against returning to school, but that she’s dismissing their threats because she wants to learn.
Despite the return of some of the girls, the school is still witnessing low turnout of students as only 220 have resumed at the time of reporting. According to the school’s principal, Adama Abdulkarim, the low turnout could be a manifestation of the fears of the students or the parents of the lingering threats from Boko Haram.
Last week, she urged parents to send their children to school without fear of past events. She said, “The government has already tried; the school has opened. I’m calling on the parents to not be discouraged by anything that has happened by not allowing their wards to come to school.
“Let them bring their children; this education is very important to the children. They are the leaders of tomorrow and we cannot have leaders that are not educated.”
VOA reported that parents in Dapchi have been meeting to discuss security in the town and resolved to send their daughters to school in defiance of Boko Haram’s threats.
The father of one of the abducted girls, Garba Haruna, told VOA, “We have to fight it. They cannot beat us, and they can never win us because we must send them back to school.”
To secure Dapchi against a repeat of the abduction, soldiers have been posted to the school’s main gates and plainclothes police officers have been stationed throughout the town.
0
SHARES
ShareTweet