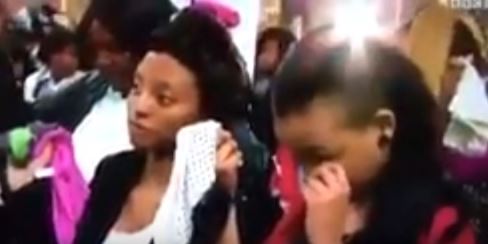 Prophet Mboro, a South African pastor has sparked an outrage online after performing one of the most bizarre religious stunt with his church member’s panties, which many have interpreted to a ritual.

Many people are calling out the South African Pastor for being a pervert, after he converted his service into a full pervert show by asking his congregants to remove their panties and wave them in the air like some sort of ritual.

To some critics amazement, the church-goers obliged and soon started waving their panties in the air. Though it is not clear what the pastor was trying to achieve by asking the unimaginable of his congregation as the worship session is going on, however he was heard saying, “Must we stop because somebody does not like it?”

While this took place, the pastor placed his hand firmly on his gentials. While he prayed, his members also imitated him and also placed their hands on their genitals.

This comes as no surprise as it has been reported before now that a charismatic local preacher in Benoni, South Africa, Pastor Penuel drew widespread shock and criticism after he asked his congregants to take of their clothes in church and self stimulate until they orgasm on the floor.

In the 5 min video of the church service, the Pastor can be heard telling the congregants that God had already sent the angels to oversee the event.

“Start now, the angels are here watching to see who is doing and who is not doing.” the pastor bellows out loudly.

Shortly afterwards, he instructed all his members to take of their clothing and look at the most attractive person in the church, and then start to self stimulate.