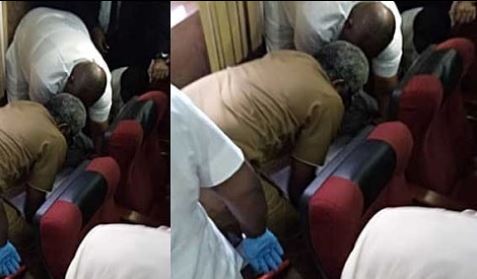 The former national publicity secretary of the Peoples Democratic Party (PDP) Olisa Metuh  collapsed during his resumed trial in an Abuja High Court on Monday.He was trying to make his way to the dock when he suddenly collapsed.The trial judge, Justice Okon Abang, asked the court officials to explain what happened. The officials informed the court that when the case was called, Metuh was making his way to the dock when they all heard a loud noise and noticed the defendant on the floor. The trial judge continued with the trial even though Metuh was still on the floor.

Photos: 3 Pro-Biafra IPOB Members Shot In Onitsha And Over 30...