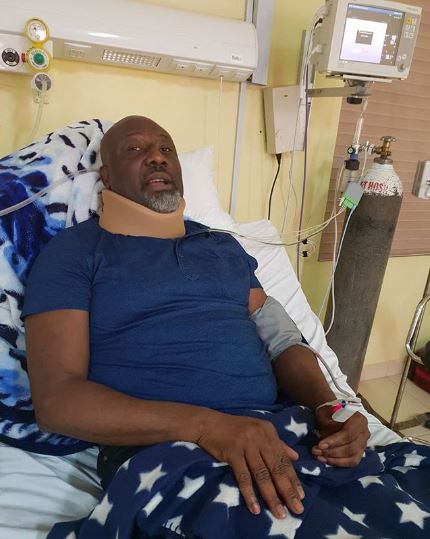 The embattled chairman of the Senate Committee on FCT, Senator Dino Melaye (APC, Kogi), yesterday, explained why he will not resume at the Senate today.

The Kogi lawmaker said he was not strong enough to resume work at the senate. He, however, said he had bounced back to the chagrin of those who sought to seal his lips from speaking out against tyranny, politics of oppression and blackmail.

Melaye’s running battle with the police over allegation of gun running landed him in hospital from where he appeared in the courts on a stretcher.

In a message tagged ‘Thank you Nigerians’ he personally posted to our correspondent via WhatsApp, he said he would continue to speak the truth. It reads: “Someone once said that rock bottom is good solid ground and a dead-end street is just a place to turn around. In the last few weeks, I have been taken to the good solid ground at the rock bottom and they couldn’t go further.

I have been brought to the dead-end street but with you standing by my side, I have turned around and bounced back to the chagrin of those who sought to seal my lips from speaking out against tyranny, politics of oppression and blackmail.

“They unleashed an endless barrage of physical, psychological, metaphysical and emotional torture and assault on me, but, through the power of the Most High, and you the good people of Nigeria, we have once again seen the triumph of truth over lies and good over evil.

“The state unleashed its raw power on me and released 200 man-strong fully armed policemen – on a man without a knife or a bullet. It did this because I called injustice by its name and called for accountability.

For this they sought to break my spirit and destroy me permanently,” he said.
On the failed move to recall him, Melaye said, “While in the dark and unable to fight for myself, they sought to take my mandate, which you had freely given to me.

But you answered back and quenched deceit in its wake. You stood resolute and unflinching and defended your mandate to me. I thank you from the bottom of my heart. In their attempt to break me, they have made me stronger,” he said.