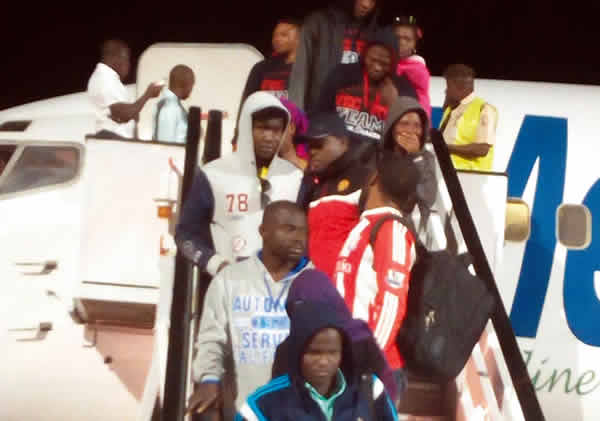 Another batch of 157 Nigerians, including nine pregnant women, on Friday voluntarily returned from Libya with the assistance of the International Organisation for Migration.

Tamrat said that the Nigerians arrived at the Cargo Wing of the Murtala Muhammed International Airport, Lagos at 4.15a.m. aboard a chartered flight.

He said that the returnees comprised 89 males and 62 females, including three children and three infants, with six medical cases.

Tamrat said that the Nigerians returned from the Libyan cities of Janzour, Salah Adden and Tajoura.

According to him, they were received by officials of government agencies including the National Emergency Management Agency and the Nigeria Immigration Service.

He said that officials of the National Agency for the Prohibition of Trafficking in Persons, Federal Airports Authority of Nigeria and the police were also on ground to receive the returnees.

He said that the IOM had assisted the return of no fewer than 8,500 Nigerians from the North African country where they had been stranded en route Europe.

Tamrat noted that Friday’s arrival brought to 514, the number of Nigerians who have voluntarily returned from Libya in June under the Voluntary Return Assistance Programme.

UK May Deport 1,000 Migrants Who Lied In Their Applications