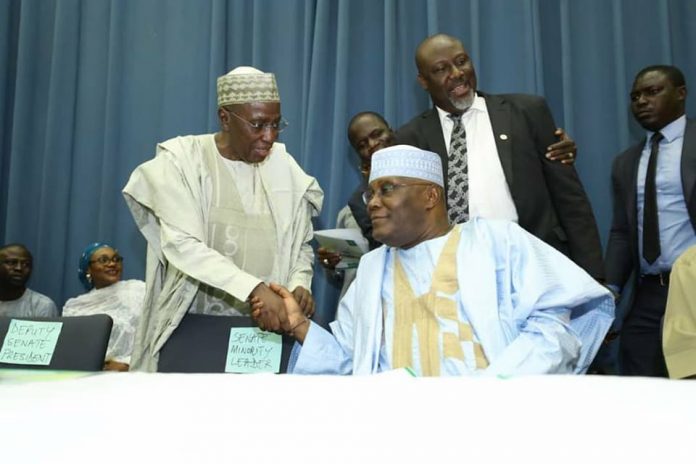 With barely two weeks to the national convention of the Peoples Democratic Party, PDP, former Vice President, Atiku Abubakar has taken a step closer to clinching the sole ticket to contest the 2019 Presidential election.

The Presidential hopeful, who Thursday, inaugurated a 60-member nomination council ahead of the primaries slated for October 6, 2018, has succeeded in making a significant in-road into the heart of one of the vital organs of the party, the Board of Trustees, BoT.

While reeling out names of council members at his campaign office in Abuja, Atiku shocked not a few Nigerians with the inclusion of notable BoT members including former national chairman of the Party, Okwesilieze Nwodo, Chief Emmanuel Iwuanyanwu, Senator Stella Omu, Chief Tom Ikimi and Chief Vincent Ogbulafor.

The move, Saturday Vanguard gathered is a strategic one aimed at boosting the chances of Atiku, in the event of the failure of other 12 aspirants to agree on a consensus candidate.

It would be recalled that last week, chairman of the board, Senator Walid Jibrin warned members on the dangers of hobnobbing with Presidential aspirants, daring those with intent to do so to resign honourably. He had said, “If you are a member of BoT, you remain the conscience of the party and you should not be moving with any aspirant. “If we are really the conscience of the party, we should not move about with aspirants.

That was what happened during the last national convention when we elected the national chairman. “Some of us went and pitched camps with aspirants, taking them all over the place. This time, we will not allow that to happen. “Anyone of us who moves about with any aspirant should resign from the BoT. We are the ones that will settle the complaints. But if we are involved, then, it will not be fair. So, we have told our members not to campaign with the aspirants because we are also the delegates.”

Flouting the directive however, the five BoT members have pledged not only to work for Atiku but also promised to go the whole distance to ensure he emerges winner at the convention.

So much is their dedication to the Atiku cause that chairman of the council, Emmanuel Iwuanyanwu, in his acceptance speech, declined the “incentives” promised members of the council by the Director General of the Atiku Presidential Campaign Organization, Otunba Gbenga Daniel on behalf of his principal.

“I have a house here in Abuja; I have a car to move around. I know there are those who don’t have. So, such persons can take their own incentive but I will collect mine after the victory of Wazirin Adamawa,” said an elated Iwuanyanwu who would go on to charge his colleagues to get down to business immediately.

Like Iwuanyanwu, Daniel told the council members not to sleep on in Abuja but to move down to their wards, states and zonal levels to drum support for Atiku, assuring them that upon victory, their efforts would be worth the sacrifice.

Given the dramatic twist of events occasioned by the rebellion within the BoT, a distraught Senator Jibrin called off the press briefing earlier scheduled to hold yesterday even as he noted that the party would issue a statement on what transpired at the meeting held with the aspirants late on Thursday night.

Rihanna looks stunning at the closing of the paralympics last night