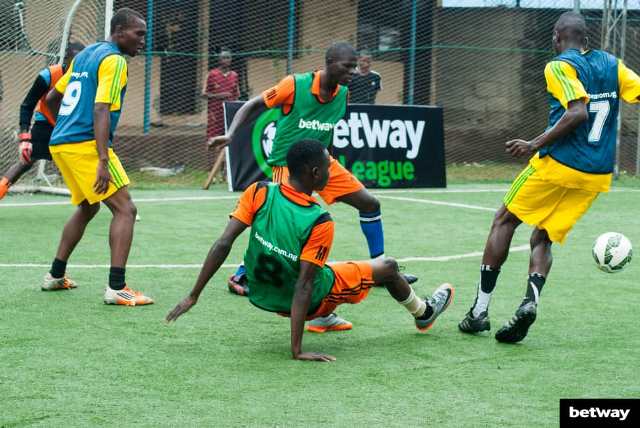 5-a-side football, more popularly known as “Monkey Post” in some parts of Lagos, has become one of the state’s most popular sports. Its popularity is largely due to the ease of organisation and its use of a smaller pitch size when compared with standard football pitches. Played with a team of four outfield players and one goalkeeper, the sport can be played both indoors and outdoors on grass, Astroturf, or even concrete.

With the recent kick off of Betway 5s League, Nigeria’s first ever organised 5-a-side competition, the sport is set to be transformed from a simple pastime into a semi-professional sport with huge prize money on the line. Inspired by the league’s upcoming kick off, we’ve put together a list of the top seven regions in Lagos with the largest and most passionate fan base for 5-a-side football.

1. Oshodi:
Regarded as one of the earliest adopters of the 5-a-side football format in Nigeria, Oshodi, is well known for its active role in grassroots football. Bolade and Mafoluku play host to most 5-a-side football games played in the Oshodi area. Young boys are usually seen at Apata Memorial High School or Oshodi High School on Saturdays.

2. Isolo:
For many residents of Isolo, especially within the Aswani area, playing football during the weekends is a very old tradition. Saturday games in Isolo are such a well-established event that it is almost guaranteed the Isolo 5s team will have a huge fan base during the Betway 5s League. Popular locations within Isolo where games are played include: Farombi primary school and LSDPC Estate field.

3. Surulere:
Surulere, home to the National Stadium and Teslim Balogun Stadium is well known and respected for its football culture and history. On Saturdays, streets in Aguda, Akerele and Bode Thomas are blocked by boys playing football. One can only wonder if their love and passion for the game will reflect during the Betway 5s League.

4. Ajegunle:
Ajegunle, a neighbourhood located in the heart of Lagos is one of the major hubs for 5-a-side football. Boundary, Ogbowankwo, Olayinka and Arumo play host to grassroots football all year around. Notable Nigerian footballers like Samson Siasia, Odion Ighalo, Taribo West and Emmanuel Amunike all played on the dusty streets of Ajegunle. Will the Betway 5s league provide a platform the next star from Ajegunle?

5. Mushin:
For decades now, there has been endless debate between Mushin and Oshodi residents about the neighbourhood with the best 5-a-side football team. Thankfully, the Betway 5s League is set to provide an opportunity for these 2 rivals to once again put their skills to test. With games attracting hundreds of spectators every weekend at Ilupeju and Idi Akala locations, we can only hope for the same level of support for their teams during the league.

6. Ikeja:
Ikeja, the capital of Lagos, is also one of the region’s most popular locations for 5-a-side football. With young men from Opebi, Oregun, Ogba and Allen playing weekly, the game’s has never been more popular. In Ikeja, most 5-a-side football players are young professionals who are passionate about the beautiful game. Ikeja is also one of the venues for the Betway 5s league, so we expect folks in the area to come out in mass to support their teams.

7. Lekki:
Lekki is one of the locations of the Betway 5s League. It will play host to a number of fixtures and with a passionate base of players and supporters, the region is likely to be a hive of activity during the tournament. The vast majority of players from Lekki are young professionals who play football engage in as a means to keep fit.
The Betway 5s league kicked off on 1 September and will run for 9 weeks. Teams all over Lagos, will be playing in two locations including two venues on Lagos Island (Lekki), and two venues on the Mainland (Ikeja and Surulere). Find out more about the league, teams and player on the Betway 5s official website. You’ll also be able to find match schedules, video highlights and league standings.

Read Rafael Benitez’s Statement After Being Sacked By Real Madrid