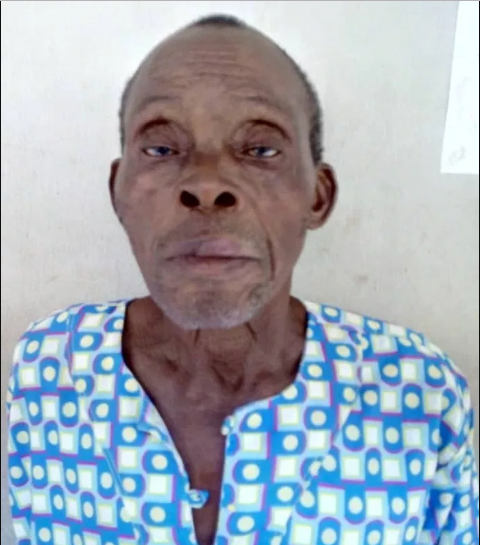 The police in Ogun have held a 70-year-old man who allegedly defiled two underage girls. Sunday Tugbobo was arrested last Tuesday for defiling the girls who are 7 and 8 years of age.

According to the police, the arrest of the septuagenarian followed a complaint by one Mr John Oru, a resident of House Number 10, Ondo Road, Ijebu-Ode, and the father to one of the defiled girls.

A statement from the Ogun State police spokesman, DSP Abimbola Oyeyemi, says Oru reported at Igbeba Divisional Headquarters “that the suspect who is a co-tenant in the same house had unlawful carnal knowledge of his 7-year-old daughter (name withheld) He stated further that it was their landlady who caught the suspect right in the act and informed them. It was when the landlady was informing them that the other girl who is eight years old also accused the man of having done the same thing to her earlier.

“Upon the report, the acting DPO Igbeba Division, SP Onah Lawrence, detailed his detectives to the scene where the randy suspect was arrested. On interrogation, the suspect confessed to the commission of the crime. He also admitted that he lured the two minors to his room with a mince pie at a different time where he had carnal knowledge of them. The two victims had been taken to Ijebu-Ode General Hospital for medical examination.”

Meanwhile, the Commissioner of Police (CP) Ahmed Iliyasu has ordered the immediate transfer of the suspect to Anti-Human Trafficking and Child Labour Unit of the State Criminal Investigations and Intelligence Department for further investigation and prosecution.