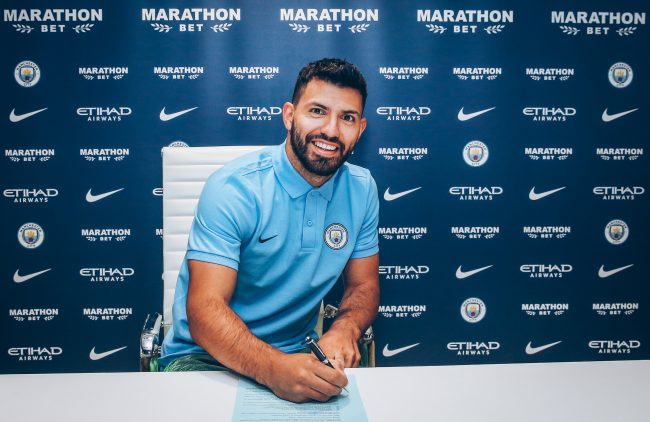 Aguero is now tied to the club until 2021, bringing to an end the uncertainty surrounding his future at the Etihad Stadium.

There had previously been conflicting versions over the end date of the Argentine’s agreement with Manchester City.

Aguero had signed a new deal with City at the start of 2016 but it was never officially announced by the club or the player.

Aguero and City boss Pep Guardiola have not always seen eye-to-eye but the former Atletico Madrid forward’s performances have improved under the Catalan’s tutelage in the past two years and the striker believes the Etihad remains the best place for his development.

“I am happy for this additional year. My idea was being here for 10 years. I’ve been here for seven years, it’s going to be 10 when the contract expires.This was the main reason I signed,” he stated after signing the new deal.

“I’m very happy because they have treated my very well since the first day I got here. I’m very happy with everything that involves the club, my teammates, the staff and the management team.

“It’s true that we’ve got a lot of young talent, that in the future can make the difference. At the same time the youngsters are quite developed already, like Leroy [Sane], Raheem [Sterling], Bernardo [Silva] and Gabriel [Jesus].

“There are a lot of players, that have got things to improve and learn, but being in this club you learn and improve faster than anywhere else.

“We have a good team, we need to be focused and if we are at 100 per cent, we have lots of chances to do great things.”