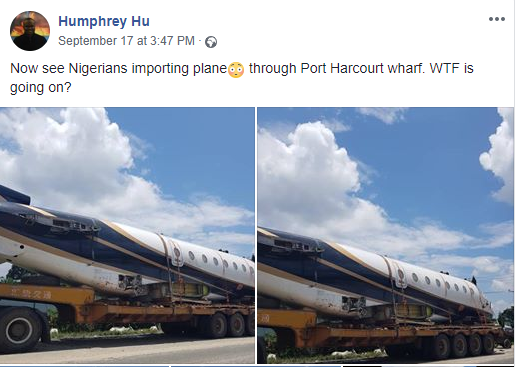 An aircraft was spotted being transported in a semi-trailer truck in Port-Harcourt, Rivers state capital, some days ago. The damaged plane was filmed by a Facebook user while being transported to an unknown location for reason yet to be ascertained.

Humphrey Hu who lives in Port-Harcourt, took to Facebook on Monday, September 17th, to share the pictures of the aircraft as he wrote; Now see Nigerians importing plane through Port Harcourt wharf. WTF is going on?

However, while some Nigerians have made unverified claims that the damaged plane was brought into the country as a fairly used product, others have argued that the plane might have been taken for repairs.

The airplanes (registration numbers 5N-TBB and 5N-TBC) have been the focus of a legal tussle between the lessor, Seagold Investment Limited, and Topbrass Aviation Services.

Some interested parties from the presidency, however, acquired the aircraft contrary to the orders of the Federal High Court in Lagos.

It was revealed that the planes have been removed from their lots at the General Aviation Terminal of the Murtala Muhammed Airport (MMA). They are now stationed at the Aero Contractors’ Maintenance and Overhaul (AMO) hanger but with registration numbers already wiped off.

Further investigations revealed that the jets are set for maintenance to enable them to fly out of Lagos to an undisclosed location.