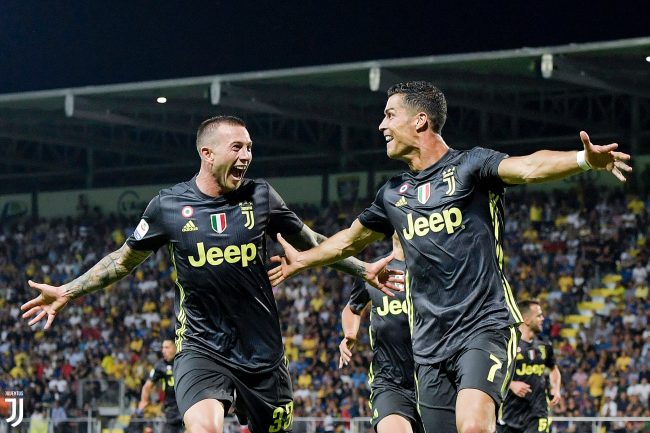 Juventus manager Massimiliano Allegri has stated that Cristiano Ronaldo is mentally stronger than others as he praises the superstar following his goalscoring display in their Sunday’s Serie A away match against Frosinone.

Ronaldo put Champions League heartache aside to lead Serie A holders Juve to a hard-fought 2-0 win at Frosinone on Sunday.

The five-time Ballon d’Or winner Ronaldo was reduced to tears after he was sent off against Valencia in his Champions League debut for Juventus.

But the former Real Madrid forward redeemed himself with Juve’s 81st-minute opener. Federico Bernardeschj netted the second goal in the 90th minute to seal victory against the struggling Serie A side.

The victory saw Juventus continue their perfect start to the season, winning their five league contests and their lone European match.

“Cristiano Ronaldo had many chances and that happens because good balls always end to players that are able to score goals in the box,” Allegri told reporters after the game.

“He missed some of these chances, in a few occasions he has been unlucky with the rebounds, but his strength is the fact that he is always into the match, even if he doesn’t score straight away.

“And that’s what happened because to score a goal like that towards the end means that he has a mentality stronger than the others.”

Ronaldo has now scored three goals in two straight Serie A matches as Juve top the league standings by 15 points after five games.

“I Am Not Impressed By Anthony Joshua” – Mike Tyson