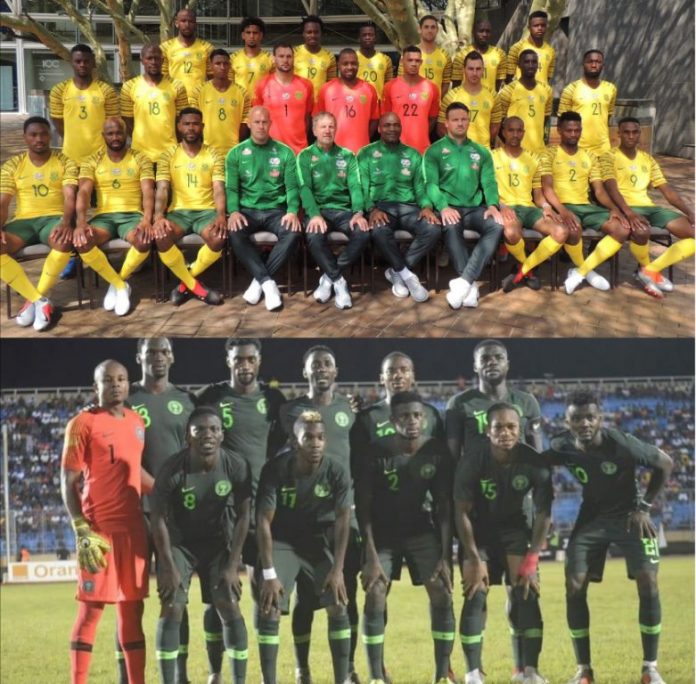 By Adeboye Amosu:
The South Africa Football Association has announced that the Bafana Bafana will host the Super Eagles of Nigeria in a 2019 Africa Cup of Nations qualifying matchday-five encounter at the magnificent FNB Stadium, Johannesburg on November 17, reports Completesportsnigeria.com.

SAFA made the announcement on their official website on Thursday.

The game has also been fixed for 3pm local time

The Bafana Bafana last played at the venue almost a year ago (Saturday, 10 October 2017) when they thrashed Burkina Faso 3-1 in the 2018 FIFA World Cup qualifiers.

Before the game against the Super Eagles, Stuart Baxter’s men will host Seychelles at the same venue in a 2019 AFCON matchday-four encounter on October 13.

The Bafana Bafana defeated the Super Eagles 2-0 on matchday-one at the Godswill Akpabio International Stadium, Uyo in June las year.

They sit in second position in Group E with four points from two games, while the Super Eagles occupy third position with three points.

‘I’m A Very Crazy Guy’ – Aubameyang Says As He Apologizes...