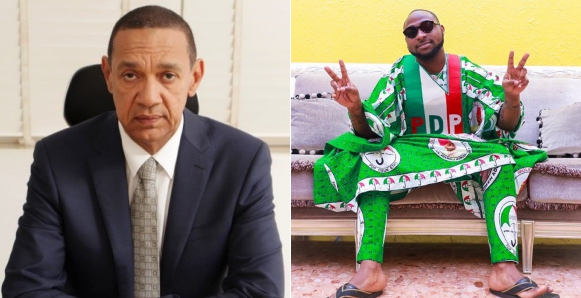 Davido has gotten more accolade rendition from Senator Ben Bruce over his input to see that his uncle, Senator Ademola Adeleke secures victory in Osun election.

Penning down a post to Davido, Senator Ben Bruce wrote;

“Dear @iam_Davido, Anyone that has a son or a nephew like you does not even need federal power. God has blessed that person with a power mightier than that wielded by the clueless @OfficialAPCNg. The @OfficialPDPNighas a lot to be grateful to God over you and your steadfastness!”

“After, by the grace of God, @IsiakaAdeleke1 has finished his 2 terms as @OfficialPDPNig Governor of Osun, I cant think of a better person to succeed him than @iam_Davido. He has shown himself to be a study in loyalty and sacrifice. I wish he can even be Governor now! #RenosDarts”.

Davido has actively campaigned for his uncle, Senator Adeleke, prior to the election. During the election and the collation of results, Davido was also active on social media, calling out the INEC officials agains any discrepancies that isn’t in favour of his uncle.

Avoid Broke Girls, They Will Stunt Your Growth – Man Says