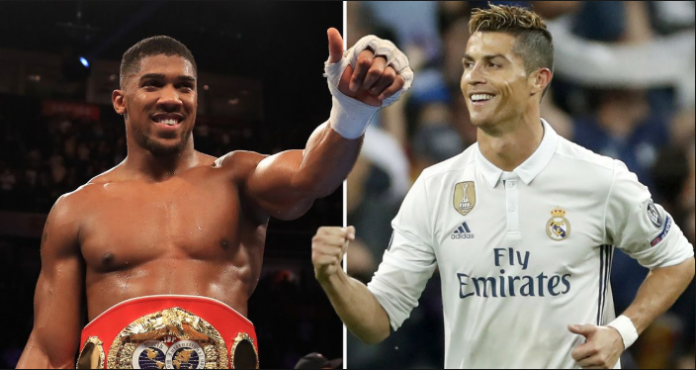 Anthony Joshua is studying Cristiano Ronaldo’s training regime in a bid to prolong his career. The Portugal star’s Juventus medical this summer showed he has a biological age of 23 – despite being 10  years older.

Joshua, who defends his IBF, WBO and WBA titles against Alexander Povetkin at Wembley on Saturday, said, “Cristiano Ronaldo did a body test. He is 33, but has the body of a 21-year-old. You have to preserve your body. “I could go in there and knock out Povetkin in a round or two, but then there is the eight weeks of ¬intense sparring, doing 200 rounds, you have to protect your body.”

The British-born Nigerian  said,  “It’s a bit weird because boxing is old school. But I am learning to ¬adjust my life. “When I watched a Pacquiao documentary, he runs and trains when his body is ready, Mayweather and Lomachenko the same.

“There is so much information out there. I tried it and feel much better. It looks lazy, but you’re still getting the same amount of work done and in a better way.”

Promoter Eddie Hearn believes Joshua is streets ahead of any other British boxers in terms of looking after his body.

And he puts this down to an “obsession” with improving –not fast cars and women.

He said,  “When he went to Under Armour for a body analysis, it blew his mind.“For a British fighter, Anthony is by far the most advanced in terms of training facilities or what he does. These –scientists looked at his sleep and ¬rehab.

“Joshua’s drive now is purely the challenge to improve himself, and there are more people working with him in new areas. Early-¬morning runs have gone. Joshua sleeps until he wakes.

“He is obsessed with improvements. He has brought all these people into camp. The only thing that is on his mind is performance and improvement. Not cars, not women, not jewellery, just improving. He won’t do anything that affects his ability to prepare.

Friends remove body of their murdered friend out of coffin, put...