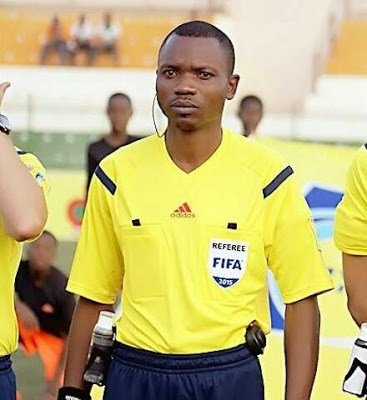 The crucial encounter is billed for the Ahmadu Bello Stadium, Kaduna on October 12.

Ngambo will be assisted by his compatriots, Oliver Safari Kebene and Nabina Blaise Sebutu who will serve as assistant referees one and two respectively

It is first time Ngambo will be officiating a match involving the Super Eagles.

Meanwhile, CAF has also announced that Joshua Bondo of Botswana will the man in the centre for the return leg fixture against the Mediterranean Knights at a yet to be named venue in Tunisia on October 15.

Bondo was in charge when the Super Eagles defeated Zambia 1-0 in a Russia 2018 World Cup qualifying fixture in Uyo lat year.

Oamogetse Godisamang and Meschaki Medupi will act as assistant referees one and two in the game.

Libya sit at the top of Group E with four points from two games, while the Super Eagles occupy third position with three points behind South Africa who have four points. Seychelles are at the bottom without any point.