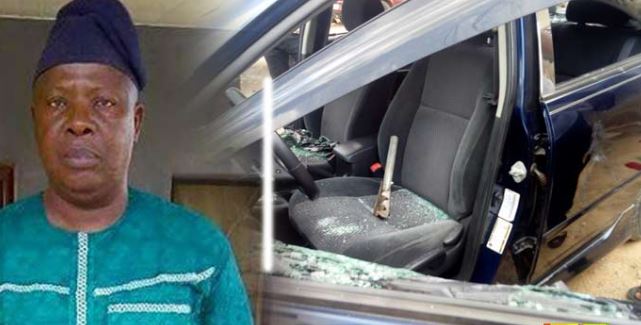 A chieftain of the Peoples Democratic Party in Osun State, Alhaji Fatai Oyedele, popularly known as Diekola, was reportedly attacked by some hoodlums suspected to be loyal to the ruling All Progressives Congress.

Our correspondent gathered that some hoodlums believed to be working for the PDP had followed some chieftains of the party to Alekuwodo area where Ward 5, Unit 17, is located to canvass for votes ahead of the Thursday rerun election but they left after some minutes.

Upon hearing this, some alleged APC thugs also reportedly stormed the area with an APC leader in Osogbo to canvass for votes for his party for Thursday poll.

It was not clear what exactly happened as of the time of filing this report.

A resident of the area told our correspondent that the APC thugs came armed with guns and other weapons and on seeing Diekola in the area they swooped on him, his driver and one other person.

Diekola’s driver and another occupant of his car were also reportedly attacked with a cutlass as the hoodlums repeatedly shot two persons and scared away residents by shooting into the air.

The incident led to pandemonium as residents fled the scene while some hid in their houses for fear of being attacked by the hoodlums. Two persons were reportedly shot and injured in the attack.

A former Commissioner for Information in the state, Mr Sunday Akere, told our correspondent on the telephone that Diekola was attacked by APC thugs.

Akere, who is a chieftain of the Action Democratic Party but a friend of the victim, said Diekola, who recently defected from the APC to the PDP, was whisked away in a vehicle belonging to the Nigeria Security and Civil Defence Crops.

A source within the NSCDC later told journalists that Diekola called the commandant of the corps that his life was in danger and a patrol team was sent to rescue him.

The source stated that the team met a mob and rescued Diekola and he was taken to the police headquarters from there.

But the Police Public Relations Officer in Osun State, Mrs Folasade Odoro, could not be reached as her phone was switched off when our correspondent called to confirm the incident.

The Public Relations Officer of the NSCDC, Mr Afolabi Babawale, when contacted, said he was not in the state and was not aware if the incident truly happened.

Meanwhile, the Chairman of the PDP in Osun State, Mr Soji Adagunodo, has called on the Inspector-General of Police, Ibrahim Idris, to fish out the perpetrators of the attack on Diekola.

Adagunodo said in a statement that, “The Osun State chapter of the People’s Democratic party wishes to draw the attention of the Inspector-General of Police, the Director-General of the State Security Service and members of the public to the series of violent attacks on leaders and members of our party in Osogbo Local Government in the last few hours.

“Earlier today, a leader of our party, Alhaji Fatai Diekola, was attacked by thugs and later abducted by security personnel on the instruction of a commissioner around Alekuwodo area of Osogbo.

“The commissioner is notorious for acts of violence and had boasted many times that the supplementary election would be a walkover in Unit 17 of Osogbo Local Government because PDP members and supporters would not be allowed anywhere near the voting centre on the day of the election.

“We call on the Inspector-General of Police and the Director General of the DSS to take swift action against the sponsors and perpetrators of violence to safeguard the fragile peace of our dear state.”

But APC candidate, Alhaji Gboyega Oyetola, has commended the police for arresting Diekola.

This was contained in a statement made available to our correspondent in Osogbo by the Director General of Gboyega Oyetola Campaign Organisation, Ajibola  Famurewa.

The statement read, “We are vindicated today that the security agents finally nabbed one of the PDP vote-buying and selling dealers, Fatai  Diekola, who has been the arrowhead of procurement and commoditisation of Permanent Voter Cards. We had complained to security agents about the violent posture of the PDP and the way they were monetising votes before and during last Saturday, September 22 election.

“ As a candidate in this election, we wish to state clearly that the arrest of Diekola is one out of PDP numerous agents and dealers purchasing voter cards in all the affected units of Ife South, Ife North, Orolu and Osogbo local government areas of the state.”

“While commending the police for the arrest of these agents of destabilisation, we urge them and other security agents to be on the alert to prevent individuals who are hell-bent on subverting the will of the people. We demand that the police must investigate this case thoroughly and prosecute any individual connected to the crime no matter how highly placed they may be in the society.”