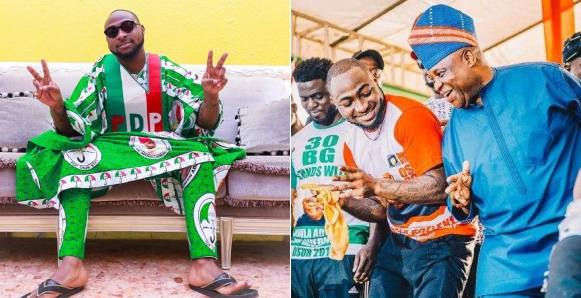 Davido has called out the Independent National Electoral Commissioner over the results from Oshogbo local government in the Osun governorship polls.

“We have the original results for oshogbo ! @inecnigeria don’t try shit !!,” the singer wrote in a tweet while results were being announced.

We have the original results for oshogbo ! @inecnigeria don’t try shit !!

The singer’s uncle, Senator Ademola Nurudeen Adeleke, who is the PDP flagbearer at the governorship polls is battling numbers of voters with the APC candidate, Gboyega Oyetola.
While there have been speculations about who has the highest number of votes, the Oshogbo local government results are expected to change the eventual result of the elections, which held on Saturday, September 22, 2018.

In several tweets, Davido expressed disappointment claiming some of the results have been manipulated.

Though the singer was in the United Kingdom for a show on the election day, he had intensified his campaign for his uncle, Senator Adeleke.

See some of Davido’s tweets below.

Ayedaade has been manipulated . 1k votes has been deducted from us ! @inecnigeria do the right thing for once ! pic.twitter.com/nCZkHeeGBr

Fake ! Lol I see some tampering goin on smh https://t.co/bXta4GTxsY #BBNaija: How social media helped me find my dad – Erica