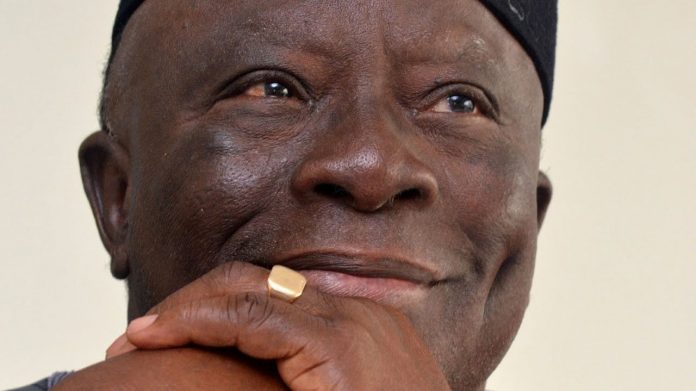 A chieftain of the pan-Yoruba socio-cultural organisation, Afenifere, Chief Ayo Adebanjo, has said that the ruling All Progressives Congress(APC) has failed the people of the country and should be voted out of power in the 2019 general elections.

The elder statesman said Nigerians should ensure that the APC did not return to power at all levels in 2019.

He stated this at a special colloquium to mark the 80th birthday of a former Secretary to the Government of the Federation, Chief Olu Falae, held in Akure, the Ondo State capital on Friday.  The colloquium was themed ‘Nigeria: Works in Progress’.

The nonagenarian urged Nigerians to vote only for politicians that could change the negative aspects of the nation positively.

He said, “Anything that will get rid of the APC should be done. It must be done at the local, state and federal levels. The APC has failed the nation and it must be shown the way out.”

Also speaking at the event, a former Minister of Information and a former Minister of Education, Professor Jerry Gana and Professor Tunde Adeniran, respectively urged the President Muhammadu Buhari-led government to do more in fighting the increasing rate of hunger and poverty among the masses and persistent killings by herdsmen in the country.

In his own remarks, the immediate former governor of Ondo State, Dr Olusegun Mimiko, described Falae as a godfather of progressivism in Nigeria.

“Chief Falae has been an inspiration to us in Nigeria,” he added.

Falae, who is the National Chairman of the Social Democratic Party, stated that Nigeria needed political parties with ideology, saying most of the parties existing in the country lacked political ideology.

He, however, explained that it was only the SDP that had the ideology as a political party.

Reacting to the calls on Nigerians not to vote the APC, the party’s National Publicity Secretary, Yekini Nabena,  appealed to Nigerians whom he said were still desirous of the nation’s progress to vote for the ruling party which he said had given a good account of itself in a little over three years since it came to power.

He said, “Our appeal to Nigerians — especially those who love the progress of this country — is for them to keep faith with our party. When you look around, you will attest to the fact that the President Muhammadu Buhari-led APC administration has done well. It has repositioned Nigeria for the better. In just three years this administration has given Nigeria a better sense of direction.”