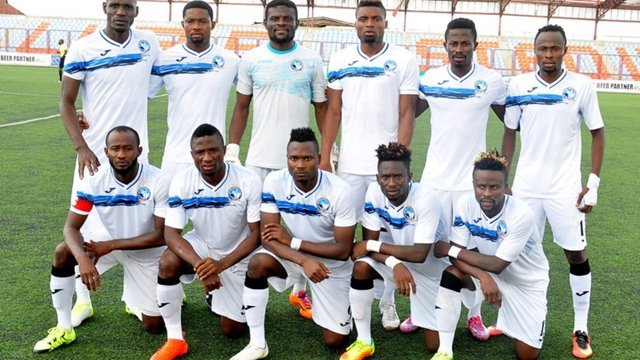 By Adeboye Amosu:
Enyimba secured a place in the semi-final of the CAF Confederation Cup following an emphatic 5-1 win against Rwanda’s Rayon Sports in the second leg of their quarter-final fixture in Aba on Sunday, reports Completesportsnigeria.com.

The People’s Elephant progressed on a 5-1 aggregate scoreline having held their visitors to a 0-0 draw in the first leg last Sunday.

Stanley Dimgba opened scoring for the hosts in the 12th minute with a cool finish following a free flowing move.

Rayon Sports silenced the home fans when Caleb Bimenyimana grabbed the equaliser in the 25th minute.

Enyimba took control afterwards with left-back Ikouwen Udoh firing them ahead again in the 29th minute and Sunday Adetunji getting the third goal two minutes after the break.

Isiaka Oladuntoye made the victory more emphatic by grabbing the fifth goal in the 78th minute tapping the ball home from close range.

Usman Abdallah’s men will now meet the winner of the game between Morocco’s Raja Casablanca and CARA Brazzaville of Congo in the semi-final next month.

See How Much Super Eagles Will Get For Each Goal Scored...