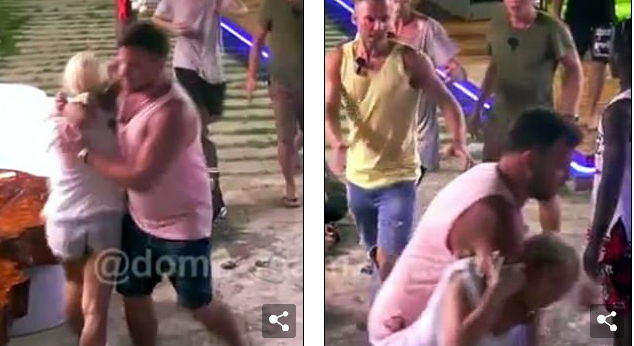 A female reality contestant beat up her rival during a live broadcast of Russia’s most-watched show for going on a date with her husband.

In the clip, from the show ‘Dom [house] 2’, Tatiana Blumenkranz, 25, is seen  repeatedly kicking Mariana Petria on the ground.

It is believed she attacked Ms Petria after she enjoyed a romantic dinner with her husband Valery Blumenkranz, 29, who is also on the programme.

A group of contestants sat in the communal area heard Ms Petria’s screams and ran over to intervene, but even after they were pulled apart she continued to try to kick the 24 year old.

At one point, the broadcasters cut to an ant mound instead of showing the sickening attack.

Eventually, Mr Blumenkranz grabbed his wife and put her into a headlock before the other contestants pushed her away.

Ms Petria was seen crying after the assault as Mr Blumenkranz tried to throw something at his wife, but the other contestants pulled him away.

The clip, posted by producers after the show, has gone viral on social media, racking up more than a million views.

Contestants on Dom 2, which began in 2004, have to build a house while trying to find a partner on the show.

Mr and Mrs Blumenkranz, who have a child together, are reportedly on the verge of divorce after Ms Petria was seen kissing and cuddling with Valery.

Pastor Flees With Church Member’s N10m Given To Him To Pray...