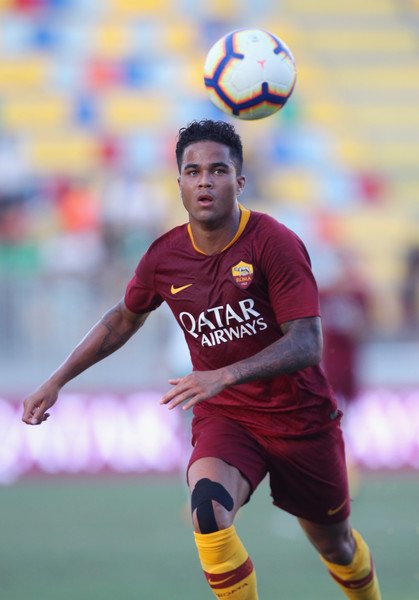 AS Roma coach Eusebio Di Francesco has hinted that he will hand Justin Kluivert his first Serie A start away at Bologna on Sunday, in an attempt to snap an underperforming Roma out of their slumber.

Kluivert, – the son of Holland great, Patrick Kluivert, was signed from Dutch club Ajax Amsterdam this season, but has made three substitute appearances for Di Francesco’s team.

The 19 year old Holland international could be joined in the starting XI by fellow teenager Nicolo Zaniolo, who was handed a shock debut against Madrid on Wednesday.

Last season’s Champions League semi-finalists crumbled to a 3-0 defeat at Real Madrid in midweek that stretched their winless run to four matches.

Di Francesco has diagnosed a lack of intensity and focus as the problem and will turn to Kluivert on Sunday after omitting him from the matchday squad in Spain.

His coach insists the impending opportunity “shows the faith” Roma have in their new signing.

And the Giallorossi boss Di Francesco expects the selection shake-up to help unlock the team’s potential.

“We need a bit more fire in our bellies. It’s my job as the coach to get that from my players,” he said.

“The fans want to see it and it’s right they should demand it. We need to play aggressively because that’s the only way to get results.

“Everyone is trying to identify problems at the moment while I’m looking for solutions.

“It’s not about fitness but conviction. We’re not focused enough to step in and make up for a team-mate’s mistake. I want them all to go that extra yard.”

Di Francesco insisted there was no ulterior motive behind the 19-year-old’s inclusion and that another appearance is possible at Bologna.

“Picking Nicolo Zaniolo in the starting line-up at the Bernabeu wasn’t just about sending a message,” he said.

“He could make his Serie A debut too. He’s got plenty of ability. All my choices are geared towards what’s best for Roma.”