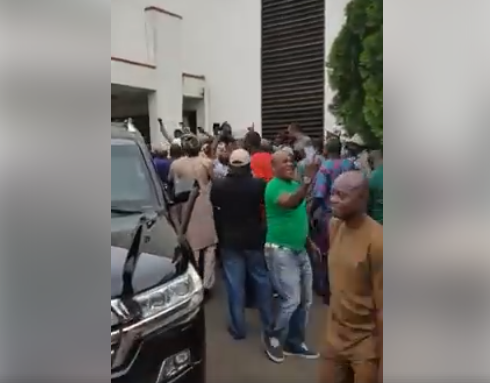 There was jubilation at the Osun state government house earlier today when supporters of the All Progressives Congress (APC) thought that their candidate, Alhaji Gboyega Oyetola, emerged the winner in the just concluded gubernatorial election.

The jubilation started when the decisive Osogbo result was announced and went in favour of the APC. Governor Rauf Aregbesola-backed Gboyega Oyetola, was declared winner of the Osogbo constituency.

The result announcement sparked jubilation among the staff and others who gathered at the government house to sing songs of victory.

Meanwhile, the Independent National Electoral Commission (INEC) has announced Thursday, September 27, as the date for the governorship rerun election in Osun state.

This followed the declaration of Saturday’s exercise as inconclusive.

Ademola Adeleke, candidate of the Peoples Democratic Party (PDP), had polled 254,699 ahead of Isiaka Oyetola of the All Progressives Congress (APC) who had 254,345 votes.

Joseph Afuwape, INEC’s returning officer, had said since the total number of cancelled votes, 3,498, exceeds the difference between the two leading parties (353), it was impossible for any party to be declared as winner.