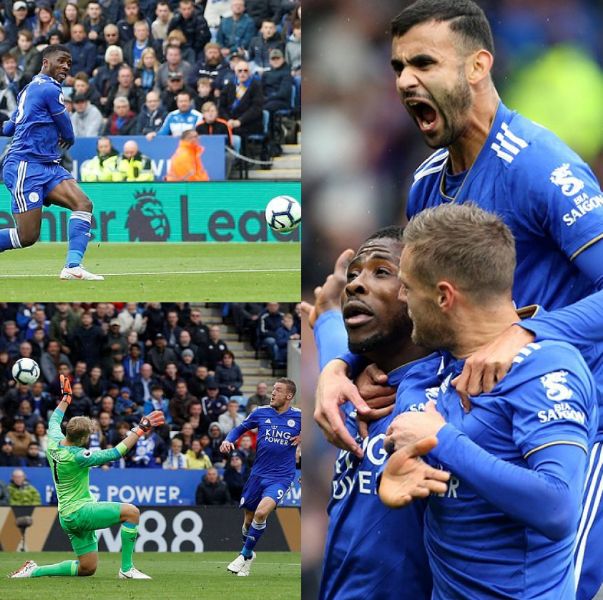 By Adeboye Amosu:
Super Eagles forward, Kelechi Iheanacho, opened his goal account in the English Premier League this season by grabbing a goal in Leicester City’s 3-1 home win against Huddersfield at the King Power Stadium on Saturday, reports Completesportsnigeria.com.

Iheanacho equalised for the Foxes in the 16th minute cancelling out Mathias Jorgensen 5th minute strike for the visitors. He also provided the assist for Jamie Vardy’s 75th minute goal that seal the win for Leicester City.

He was replaced in the 77th minute by Marc Albrighton.

His international teammate, Wilfred Ndidi who received a yellow card in the 18th minute was in action for the entire 90 minutes.

James Maddison and Jamie Vardy got the other goals for Leicester City in the game.

At the Old Trafford, Manchester United were held to a 1-1 draw by Wolverhampton Wanderers.

Brazilian midfielder, Fred opened scoring for the Red Devils in the 18th minute, while Joao Moutinho equalised for the visitors in the 53rd minute.

Liverpool maintained their perfect start to the season by beating Southampton 3-0 at the Anfield.

Wesley Hoedt (own goal), Joel Matip and Mohamed Salah were the scorers for the Reds.

Burnley recorded their first win of the season by trouncing Bournemouth 4-0 at the Turf Moor with Matej Vydra, Aaron Lennon and Ashley Barnes (brace) finding the net for the home team.

The encounter between Crystal Palace and Newcastle United at the Selhurst Park ended in a goalless draw.

Sports Betting Jackpot: All You Need to Know About It