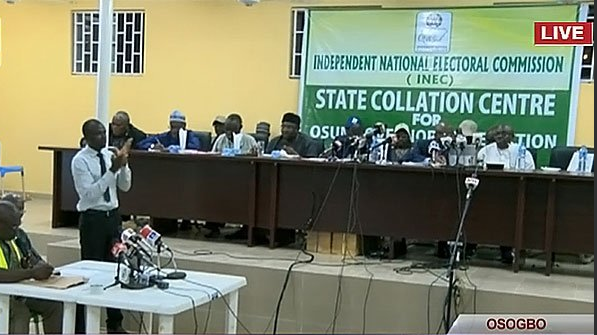 The reason for the decision, according to the electoral body, is because the number of cancelled votes is higher than the margin between the two top candidates.

The margin was, however, less than the 3,498 votes in the polling units where voting was cancelled.

“Unfortunately, as the Returning Officer, it is not possible to declare any party as the clear winner of this election at the first ballot,”

“The Independent National Electoral Commission will announce a date when another ballot will take place. I hereby declare the result inconclusive.”

A total of 48 candidates contested in Saturday’s governorship election, which is considered a crucial test for INEC as it is the last major poll before the 2019 general elections.

With the exception of the Social Democratic Party candidate Senator Iyiola Omisore, who secured 128,049 votes, no other candidate came close to the top two.

The Independent National Electoral Commission (INEC) has announced Thursday, September 27, as the date for the governorship rerun election in Osun state.

This followed the declaration of Saturday’s exercise as inconclusive.

Ademola Adeleke, candidate of the Peoples Democratic Party (PDP), had polled 254,699 ahead of Isiaka Oyetola of the All Progressives Congress (APC) who had 254,345 votes.